Its Monday and a photographic safari with Ed Selfe

I do hope that you are all super well after a lovely relaxing weekend and are sitting comfortably ready and raring for this week’s exciting read. Today we are hearing from Edward Selfe who has recently had the most incredible 3 week safari which included some time up at Nsefu. Let’s just say the game…

I do hope that you are all super well after a lovely relaxing weekend and are sitting comfortably ready and raring for this week’s exciting read. Today we are hearing from Edward Selfe who has recently had the most incredible 3 week safari which included some time up at Nsefu. Let’s just say the game pulled out all the stops! So this week Edward over to you:

I always love spending time in the Nsefu Sector and especially in the beautiful and game-dense areas around the Nsefu Camp. I led a 4-week photographic safari in September and, as is often the case, our 4-nights here gave us some of the most memorable sightings. I was guiding two repeat guests from North America and we felt very fortunate to be able to go on safari at a time when many could not.

Prior to our arrival, I had been following the exciting news about the Milyoti wild dog pack which had denned close to the Luangwa river in the southern part of the Nsefu Sector. This was slightly unusual as wild dogs tend to prefer more secluded areas where there is a lower chance that their den will be discovered by lions or hyenas. However, the adults were doing well and had reared a good litter of pups, despite this apparent threat.

We were fortunate to find the pack just as they moved away from the den and went mobile with the puppies for the first time. I won’t easily forget the sight of the whole pack, coming down the road towards us in the dawn light, passing on both sides of our vehicle and then running through the camp as they hunted north along the river! Because the pups were still very young (perhaps 4 months at this stage) they tended to hunt early and then hide up in very deep thickets during the day. Our encounters with them were therefore brief but always exciting, including finding them with a bushbuck kill one morning. 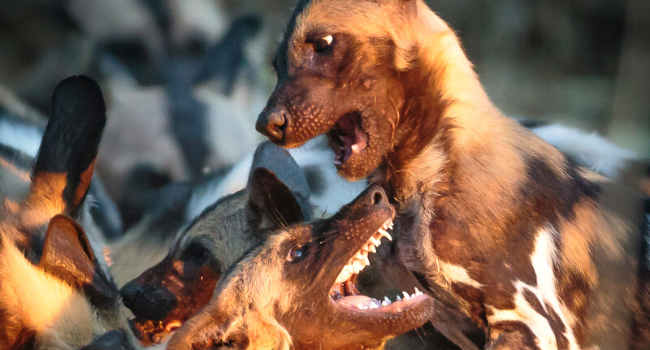 The light in the Luangwa in dry season is fantastic for photographers; very early in the morning, placing the light behind the subject creates a soft halo, especially around ‘fluffy’ animals such as baboons and waterbuck; later in the morning, side-lighting animals brings out the definition of animals’ shapes; and even late in the morning, the dusty light is soft enough to shoot as long as the light is behind the camera. With very experienced photographers as guests, we spent a lot of time on certain sightings, preferring to take a chance on creating something really special. We weren’t always successful, of course, but we had a lot of fun trying. 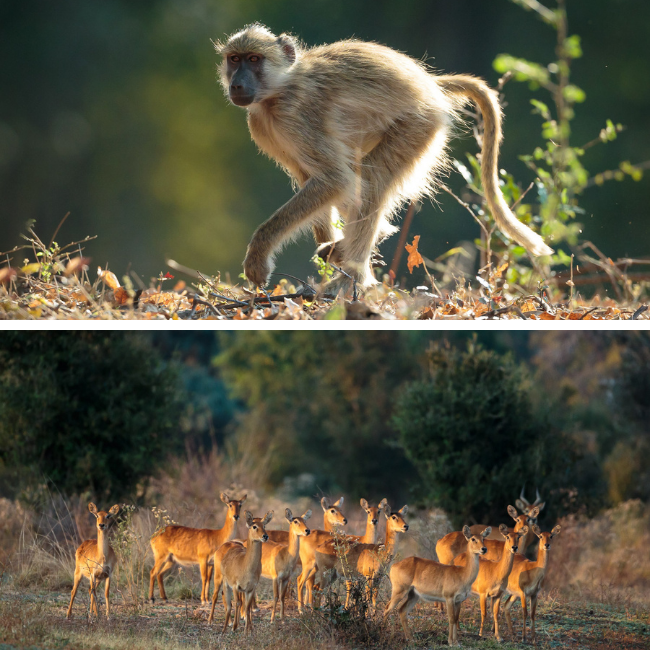 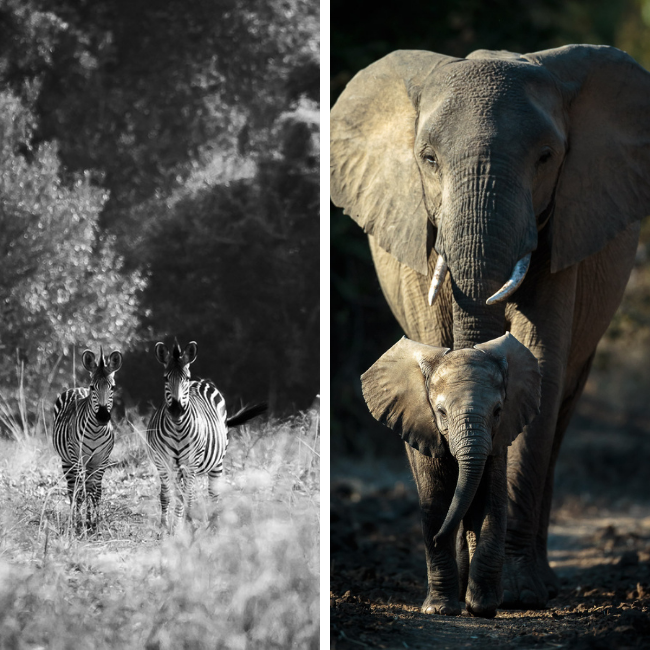 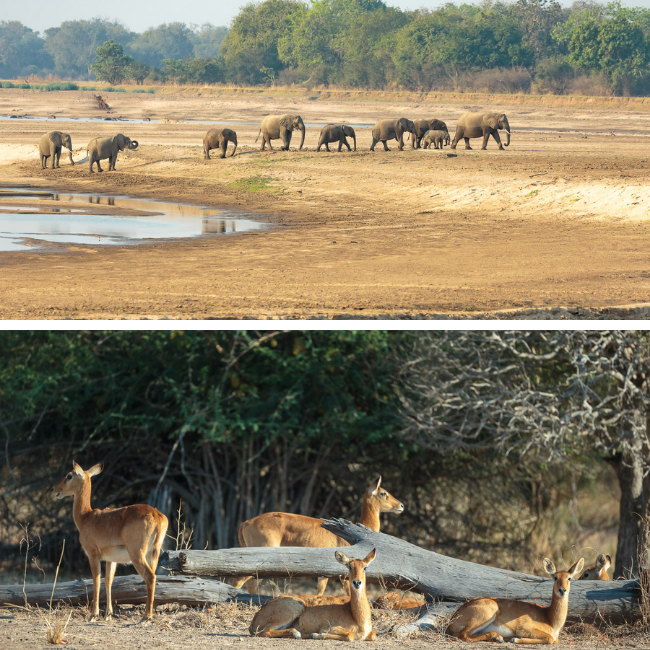 We enjoyed time sitting at the edges of the lagoons, soaking up the activities of creatures large and small as they drank, fed or competed for space. Alongside the resident waterbirds, such as Stilts and Ibises, we spotted some of the first returning migrants from Europe as the palearctic autumn begins. Marsh and Wood Sandpipers joined large numbers of Ruffs which appear to have migrated early this year as they are still wearing more of their breeding plumage than normal. 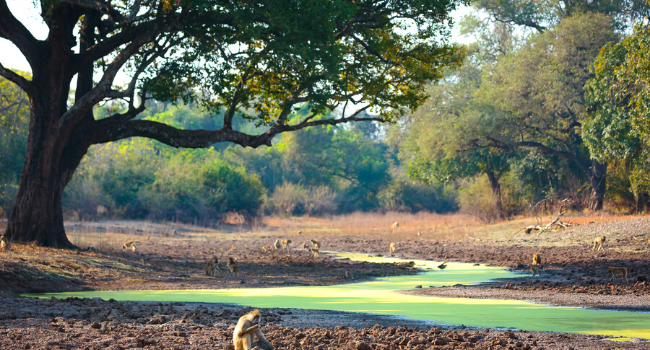 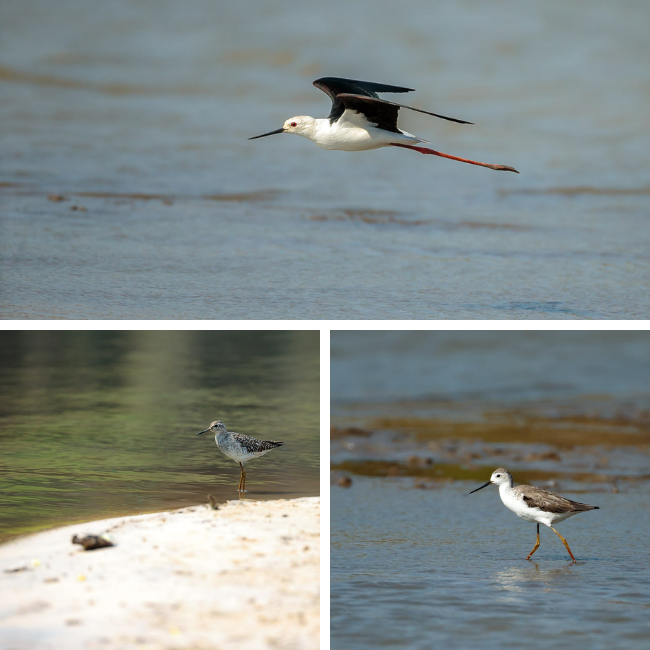 One particular morning, we went in search of Olimba, made famous by Will & Lianne Steenkamp’s Leopard Legacy film, and her two cubs. Some careful searching around the wafwa island revealed her male cub who was making the nearby puku very nervous. We spent over an hour with him and it was special to watch as his initial nervousness slowly eased and turned eventually to intrigue. Slowing the pace and taking time on sightings always pays. 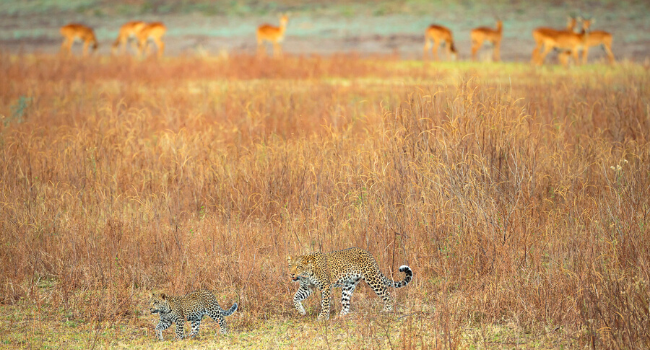 On our final morning we picked up the tracks of one of those elusive, spotted cats and were able to follow the spoor for a long way. But alas, when we arrived at a T-junction it was clear that he had walked straight on. 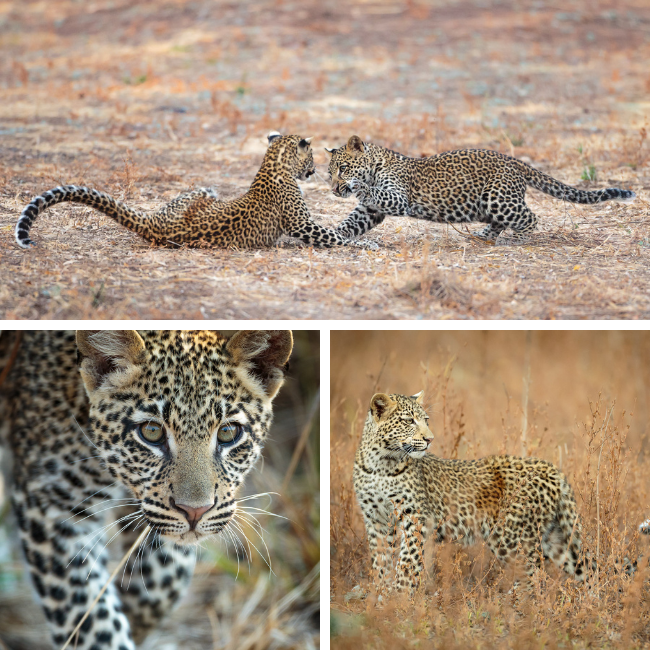 The river was high this year, and the inland water of the Croc River was still flowing until August, so game is more dispersed than normal for September. This meant that the Hot Springs, an inland natural water source, did not attract the game that we normally find there. However, it is still a beautiful area and we enjoyed kudu, Crowned Cranes and waders at the source of the spring. We also had a true sundowner (at sundown time) which is a rare event for photographers as we usually continue photographing until dusk! 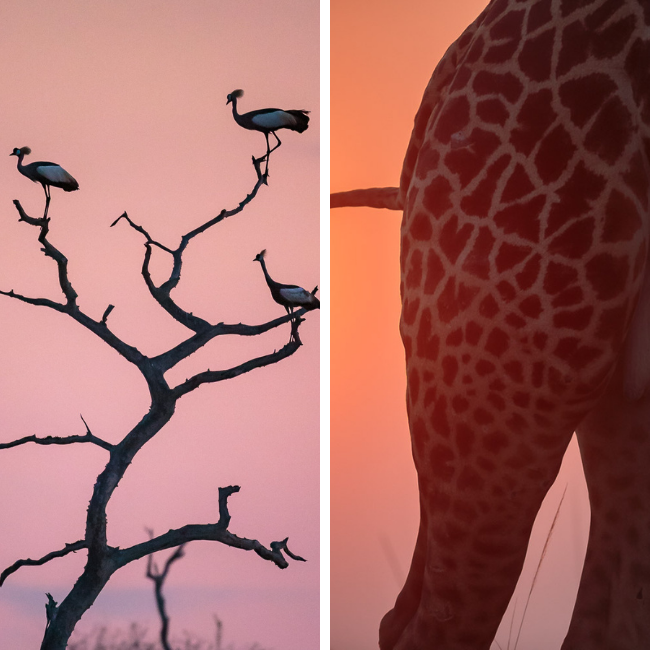 Increasingly, the measure of luxury on safari is not the thread count of the bedding or the quality of food, though Nsefu is excellent for both, but the exclusivity of the experience. Whenever I visit the Nsefu Sector, I know that I will enjoy wonderful sightings and I’ll be able to help my guests create stunning images without having to plan around other people. This is increasingly rare and I am always grateful for it. Thank you to the RPS team for a memorable visit.

Wonderful, thank you so very much for sharing these wonderful sightings and images with us Ed! It’s always great to have you and your guests join us on safari and we can not wait for more news in the future.

From my side though I think that’s really all we have time for and plus there is nothing that I can say which will improve on this story. So for this week I shall bid you all a very fond farewell and hope that you have a wonderful week ahead with plenty of smiles and laughter and don’t forget to look after one another.