I hope that you are all well and have had a lovely weekend with all sorts of fun and games. Here all is good and we are certainly keeping ourselves busy and out of trouble but this week we are hopping across the border to hear from Conrad in Malawi so Conrad over to you:…

I hope that you are all well and have had a lovely weekend with all sorts of fun and games. Here all is good and we are certainly keeping ourselves busy and out of trouble but this week we are hopping across the border to hear from Conrad in Malawi so Conrad over to you:

“Over here in the warm heart of Africa, the emphasis has certainly been on warm. On a recent whirlwind tour through Pumulani, Kuthengo & Mkulumadzi temperatures soared beyond the 40°C mark with regularity – the one or two rapid rain showers we had did little to bring relief.
None the less, a journey through the Malawi is always fun. It also means I have fresh stories and news to share with you.

The trip started off at Pumulani, where the past two weeks were spent working on both the swimming pools – yes, I can already hear you asking, “why drain the pools at the hottest time of the year?!” but it is the only time we could find to get the job done. And that, ladies and gentlemen, is a sign that business has been ticking along nicely which we are very thankful for. The other reason for getting the job done now is that the hyenas have taken a liking to the beach pool’s plumbing. During October it was not uncommon to see staff walk around in the morning looking for chewed up valves. So, waiting until February to get it repaired was not really an option. 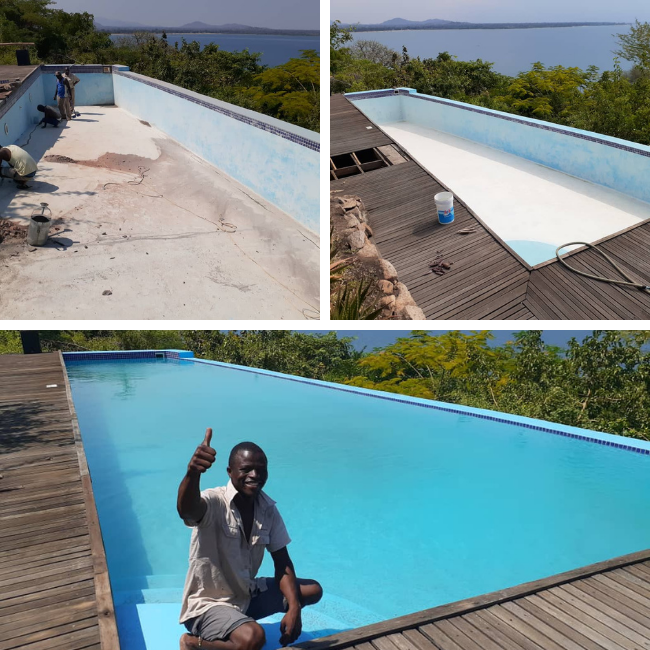 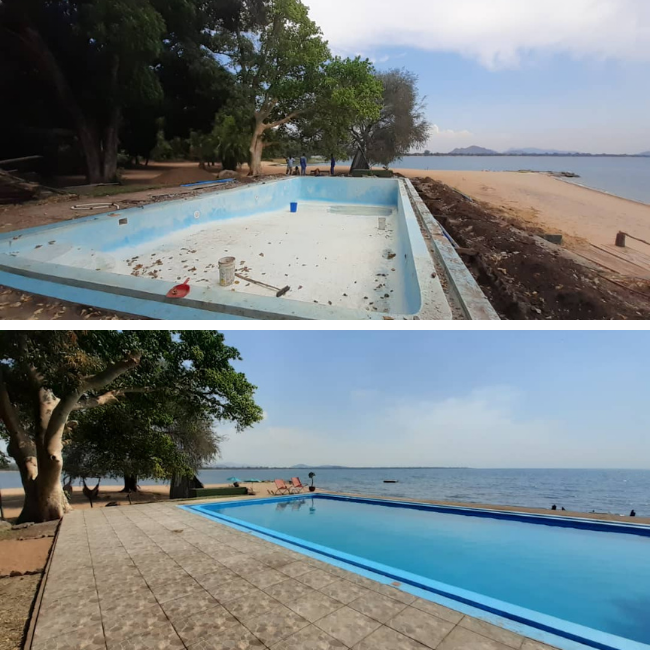 Damson and his team have been upgrading plumbing and electrics, lying tiles, painting, and oiling decks and it is going to look great when it’s all done. It was a great team effort and where our original plans were faulty, impromptu plans were drawn out and approved right there and then 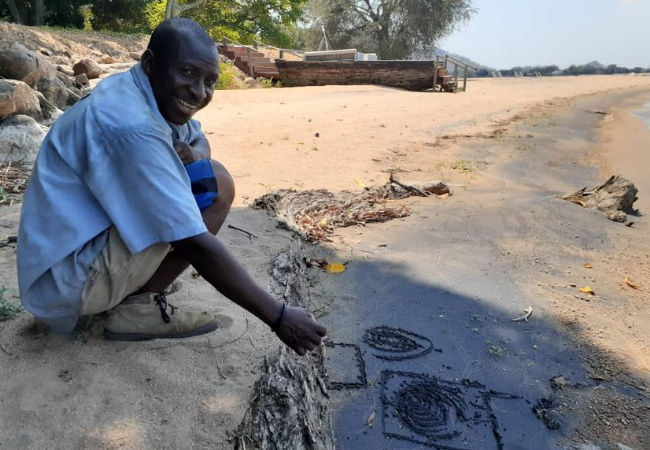 On the road to Kuthengo, a three hour drive south of Pumulani, the Flamboyant trees are all in full bloom, decorating our local curio market with their bright red flowers. Kuthengo is also doing well and have had a steady stream of guests, albeit mainly over the weekends. We’ve been spoilt with sightings of buffalo, sable, elephant & cheetah as well as a few rhino bums (one group of guests did see the front end of one of the magnificent beasts). 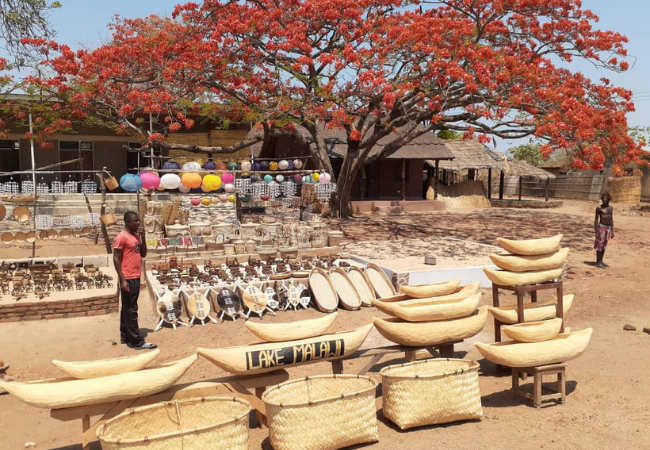 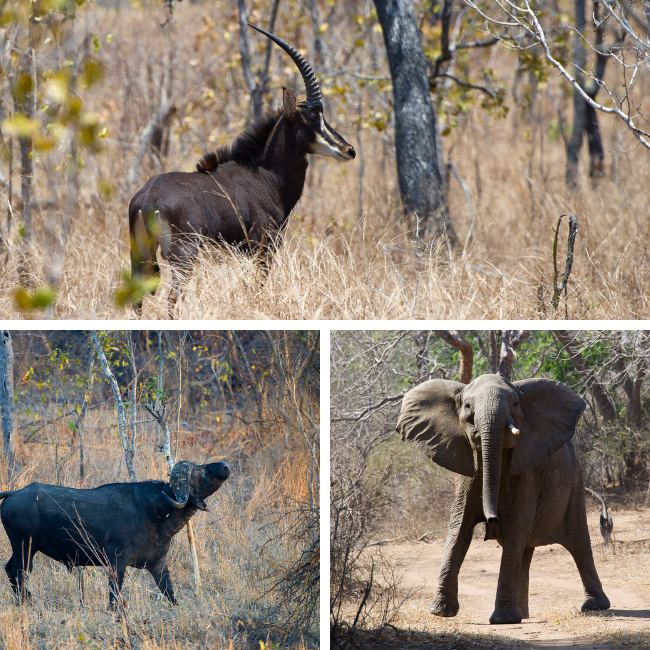 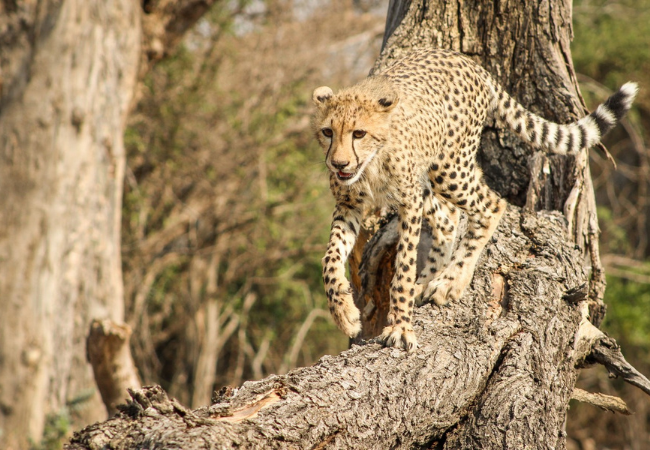 Many of our readers would have met Amon Banda, Kuthengo’s tall and ever friendly camp anchor. As thanks for his tireless work with Robin Pope Safaris over the past 12 years we arranged a seat on a recent helicopter trip over the park for him. Possibly, the highest he’s ever been off the ground before this was the few meters up when fixing the camp’s water tank stand last year. Suffice to say, he was like a (nervous) kid in a candy shop. These days it is all he talks about, much to the frustration of his colleagues in the staff village. Thanks again Amon for your hard work and loyalty! 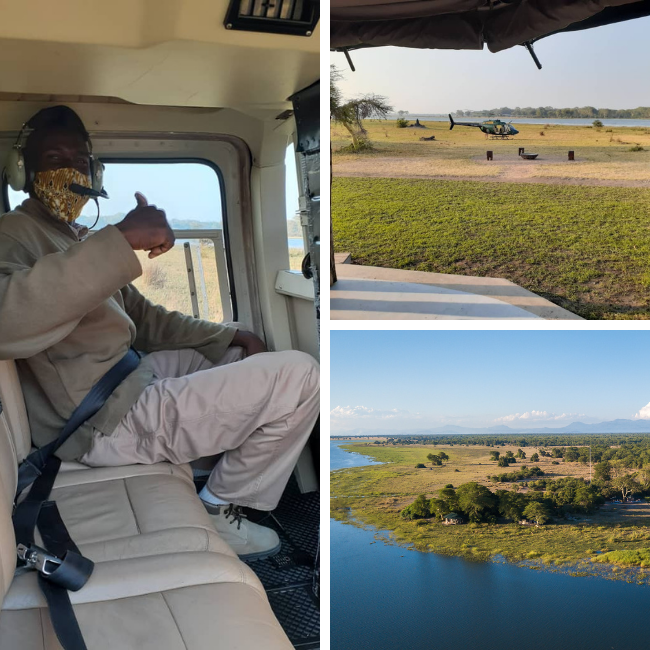 Another few hours further south, things are going swimmingly at Mkulumadzi as well. And we mean swimmingly literally as it is by far to hottest of all our Malawian locations and in my eternal wisdom, I decided not to drain the pool for repairs. What a relief! 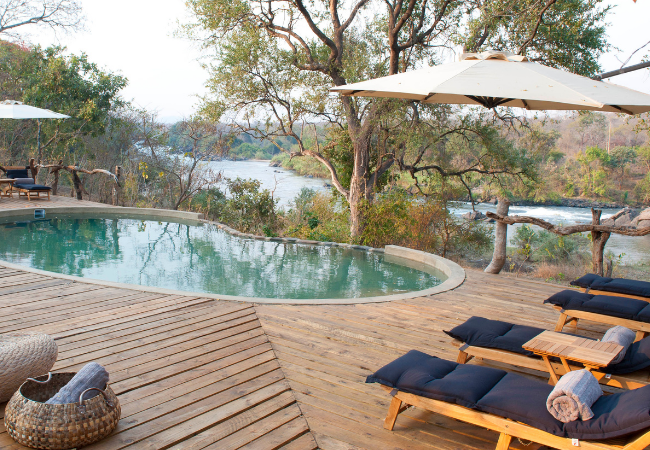 And that’s all from the warm heart of Africa for this week. We hope to see you in our camps soon.”

Thanks so much Conrad for the fab update sounds like it’s all super busy your side which is great news and we look forward to more updates soon. In the meantime I shall bid you all a very fond farewell and hope that you have the most wonderful week ahead with plenty of smiles and laughter and don’t forget to look after one another