Its Monday and back to the Majete wilderness…

Hello there everyone, here we are again another Monday and another packed Its Monday for you all so I hope that you have had a wonderful weekend and are sitting comfortably ready for this week’s update which is coming to you from Steph from our marketing team who has been down at Mkulumadzi covering for Conrad who took a…

Hello there everyone, here we are again another Monday and another packed Its Monday for you all so I hope that you have had a wonderful weekend and are sitting comfortably ready for this week’s update which is coming to you from Steph from our marketing team who has been down at Mkulumadzi covering for Conrad who took a very well earned break. So Steph – over to you:

“When Conrad called me up to ask if I could hold down the fort while he and Retha finally went on leave I don’t think I could have said ‘Yes’ any faster! One week later I was on my way back to one of my favourite spots in Malawi – Mkulumadzi Lodge in Majete Wildlife Reserve!

After an hour and a half of driving I arrive in Majete Wildlife Reserve and made my way towards our concession, stopping several times along the way to watch the wildlife including a small herd of sable. I love sables, they’re my favourite antelope and they also happen to be the ‘symbol’ of Majete Wildlife Reserve (chosen by African Parks) so I thought it was rather apt that they were the first thing I saw as I entered the park. 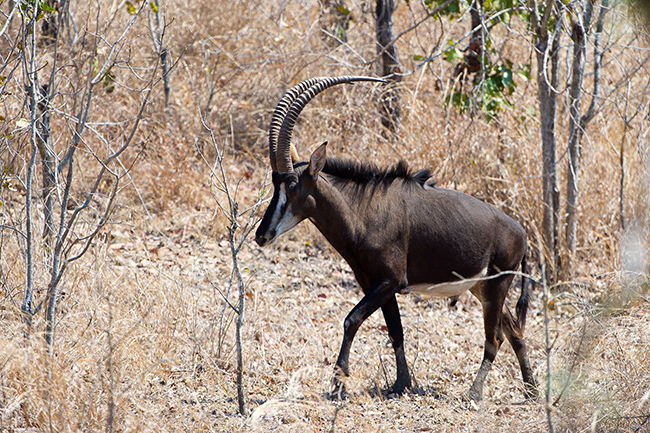 During the 10 years that Mkulumadzi has been in operation, I have crossed this bridge more times than I can remember yet the novelty of it never wears off nor do I ever tire of the views from it.

Once I reached the lodge, it was a frenzy of fist bumps and elbow taps as the Mkulumadzi team had all gathered in the main area to say hello! It was so good to see all the familiar faces (who I recognized despite everyone being masked up). I sat down with Mali the head guide to catch up. 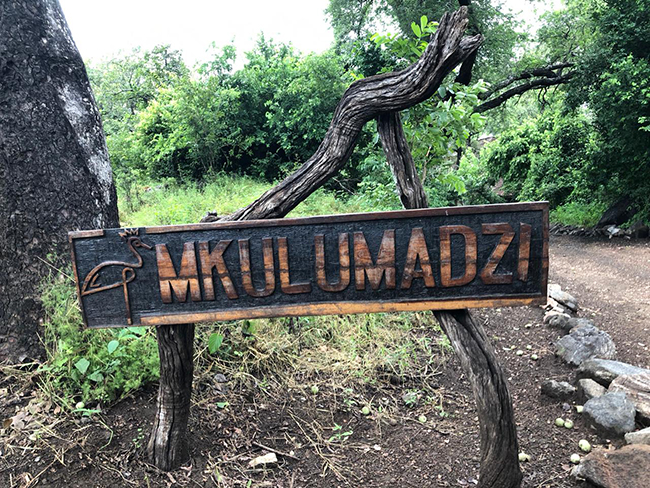 Although it has not been as busy as usual with guests, the lodge was a hive of activity when it came to wildlife and the guys had seen everything from lion and elephants and even a cheetah who took a liking to the staff block, much to the delight of the team, many of whom had never seen a cheetah before! As Mali continued to talk, I looked up across the Shire River just in time to see a herd of buffalo come down for a drink. “The welcoming committee has arrived, right on cue!” Mali exclaimed. 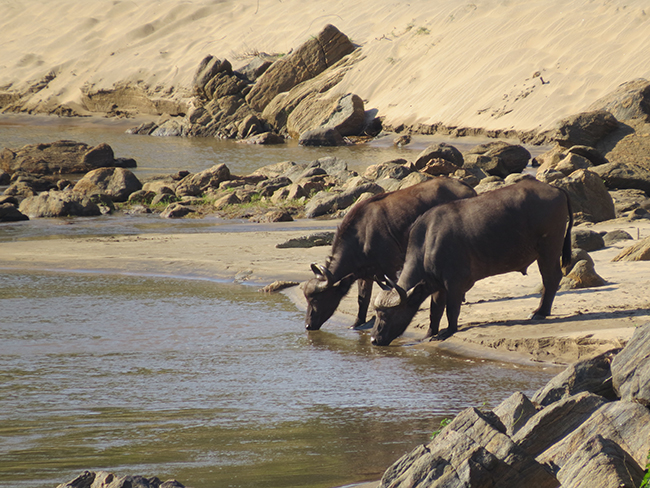 Adjusting to bush was a breeze… Despite not being an early bird back home, I genuinely enjoyed the 5am starts at Mkulumadzi. I also got to witness some spectacular sunrises and sunsets while I was out here and made it a point to watch the sunrise and sunsets from different spots around the lodge. The footbridge and the star deck were some of my favourite places to watch the sun go down but when it came to sunrises, nothing beats the ones over the Shire River.

Although I was away from the fast paced city life, there was certainly no idle time at Mkulumadzi as it was all systems go, getting the lodge ready for guests. I went from an average of 6000 steps per day back home to clocking a whopping 27000 steps each day while I was there! It’s just as well i was getting the extra exercise in because it was practically impossible for me to resist all the delicious food that Chef Thomas and Chef William were whipping up in the kitchen. As hard as I tried to avoid them at certain times of the day, they would find me, and always bearing muffins, biscuits or cakes for me to ‘try’! I would have left several kilos heavier had I not been kept on my toes running the lodge. 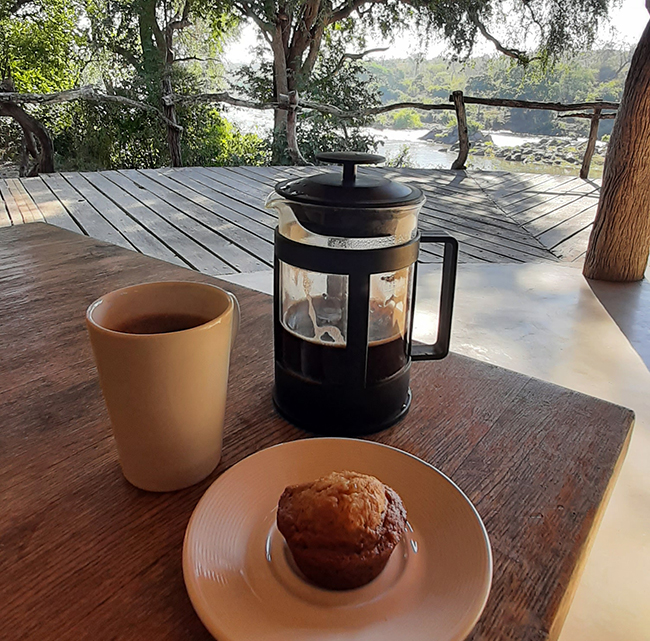 But the most significant adjustment of all had to be the lack of internet or cell phone reception which despite sounding terribly daunting, was actually a welcomed release for my mind, body and soul! However as much as I was loving this digital detox, being ‘off the grid’ posed some challenges from an operational perspective. So every afternoon while the guests were having their siesta, Mali and I would set off into the park, armed with our cellphones, laptops and binoculars (just in case), and drive to one of the loop roads along the Shire River that had decent cell phone reception. After some time driving through the bush, my phone would start buzzing profusely as the notifications began pouring in. That’s when we knew we had reached the ‘right spot’ and would stop and set up our mobile office from the comfort of the game viewer. This was taking the term ‘working remotely’ to another level.

While out on these jaunts, we were lucky to get some fantastic game viewing in, seeing everything from lions, zebras and giraffes to curious kudus, warthogs, very skittish eland, waterbucks, a glimpse of a leopard and loads of ellies who were completely unperturbed by our vehicle or us typing away on our devices and went about their ‘business’ just metres away from us. 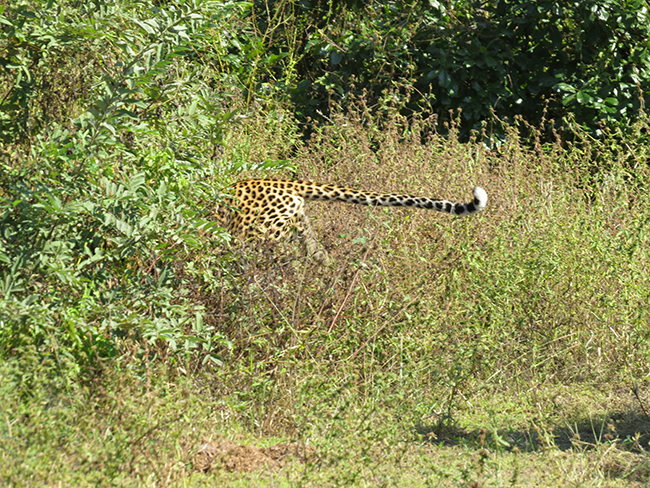 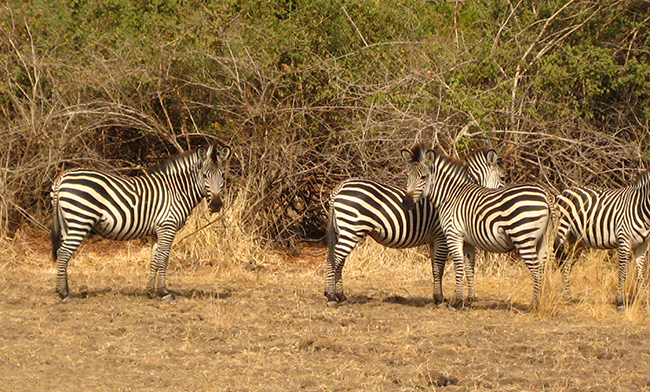 Before I knew it, my time at Mkulumadzi had come to an end. I popped in at the African Parks office on my way out and John the park manager filled me in on some exciting new developments in Majete! We cannot wait to share the news with you when the time is right so watch this space…

Wow what a wonderful account of your time at Mkulumadzi Steph and talk about leaving us with a cliff hanger we certainly can’t wait for the updates when they become available.  Here in the Luangwa as the baboons bark profusely at something prowling that they have seen in the bush I am going to bid you all a very fond farewell and look forward to updating you with Luangwa news next week.  In the meantime have a fab week ahead with plenty of smiles and laughter and don’t forget to look after one another.