Its Monday and boating the Luangwa in May

I hope that you are fabulously well after the weekend and are ready and raring for the week ahead. Here in the Luangwa, shocking as this may be, Rob and I just managed to boat up to Nsefu. We needed to zip up to the camps to catch up with the teams and check on progress and the roads…

I hope that you are fabulously well after the weekend and are ready and raring for the week ahead. Here in the Luangwa, shocking as this may be, Rob and I just managed to boat up to Nsefu. We needed to zip up to the camps to catch up with the teams and check on progress and the roads were still not passable, so we jumped into a boat and off we went. I don’t think that in the 20 years that I have been here have we ever managed to boat up to Nsefu in May! And what a wonderful day we had.

To start with, we were somewhat skeptical as to whether we would make it or not but easily discovered that the trip was going to be pretty plain sailing. The sky was speckled with light clouds which offered some welcome relief when the sun was momentarily hidden, and the water levels were such that navigating the channels was quite easy. Plus, the hippos also really helped as they relax on the water covered sand bars, making it obvious where the shallow parts are. 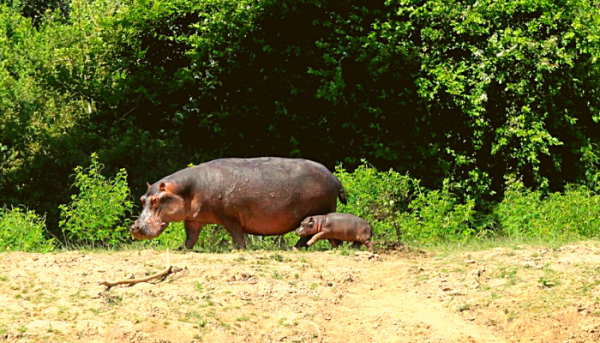 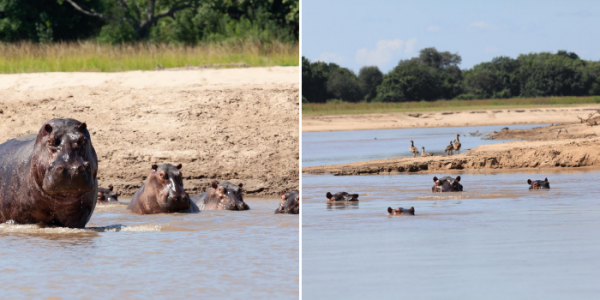 Obviously, hippos were in abundance throughout the trip; from big males playing tough defending their turf, to the tiniest little baby being led down to the water by mum. As for the crocs well, there were some real monsters relaxing on the muddy banks of the river as well as a much smaller one who seemed to have decided that relaxing on a washed-up upside-down tree in the middle of the river was a far better idea. 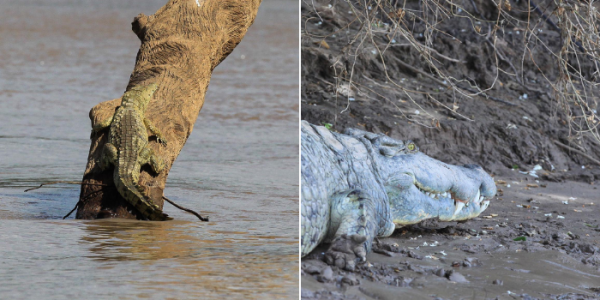 But it wasn’t the mammals that really spoilt us, it was the birdlife. Wow! it was simply incredible.

African Skimmers are always a favourite, but I must be honest with you they are not the easiest to photograph, so excuse the photos as they are not pinprick sharp. But we were lucky enough to have this wonderful flock of skimmers flying around the boat for a good 10 minutes, allowing for plenty of photographic opportunities, but more importantly it was such a treat to see them so close and in such detail.

Not long after being treated to the skimmers, we had a fly by from a wonderful goliath heron. Watching it fly over and past us then lead us to a curious sight on the banks of the river. It was sort of dappled and then started to move. As we edged closer, we discovered that it was a huge flock of red winged pratincoles who soon took to the skies. 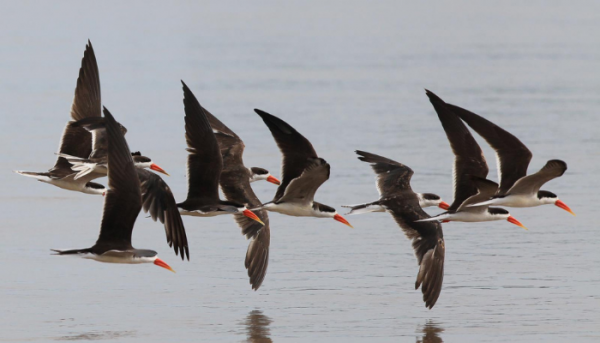 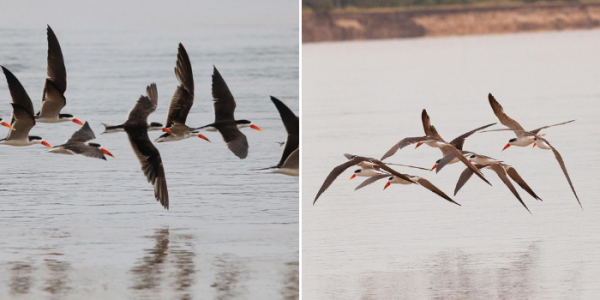 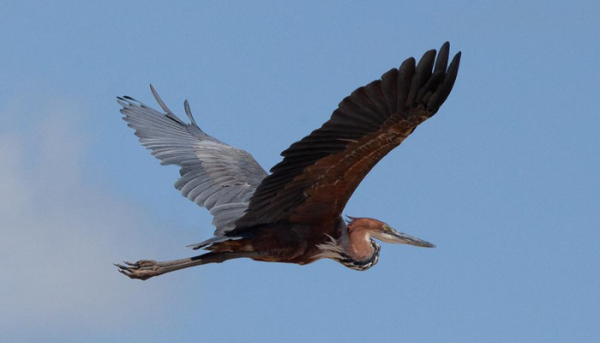 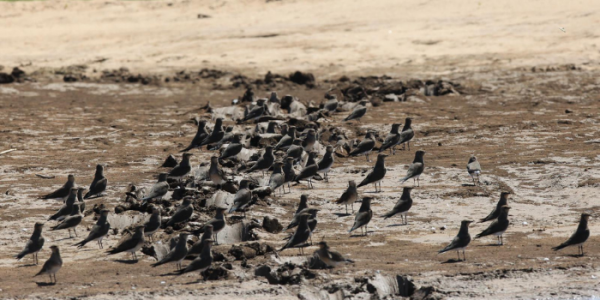 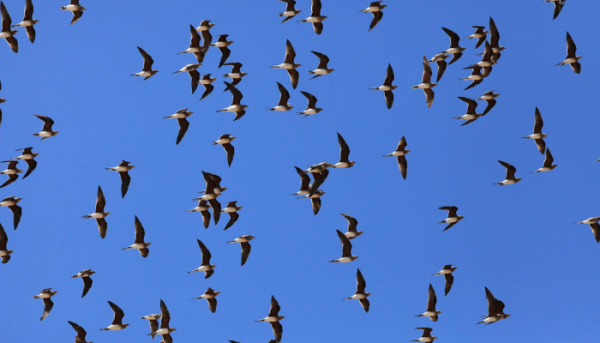 At this point we really thought that we couldn’t have any more incredible experiences, but we were wrong… Around the next bend, a flock of some 30 Crowned Cranes dancing around on the beach before being joined by some more coming in from the other side of the river. 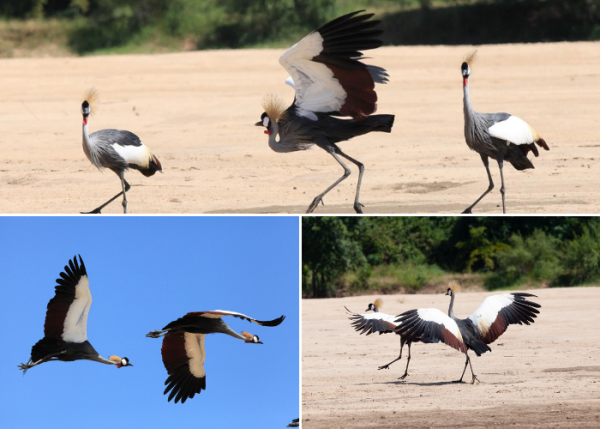 We finally made it to the camps which are looking lovely, and the teams are doing a great job, especially at Tena Tena. This is considering that Tena Tena has been left to the wilds of the bush for two years, so there has been quite a hill to climb to get it back up and running, but it is getting there, and we are very excited to get them both open in a few weeks’ time. The wildlife also seems to be interfering with the opening process sometimes in constructive ways…a resident aardvark, for one, helping disperse the piles of sand onto the paths in camp. No one has seen it yet though, and not for lack of trying, but this one is for sure is leaving plenty of signs. The resident civet though, has not been quite so helpful as it has been chewing on the freshly plastered walls, so the team really are in a hurry to get them painted to stop it.

Up at Nsefu Willie has been busy dodging elephants who seem to be regularly coming through camp, as well as wild dogs. Isaac has been out on his tractor putting in the roads and has seen heaps of plains game, big and small as well as glimpses of lions and hyenas but they are not big fans of the harrow! One thing is for sure there certainly doesn’t seem to be any shortage of sightings and we cannot wait to share them with you all very very soon. 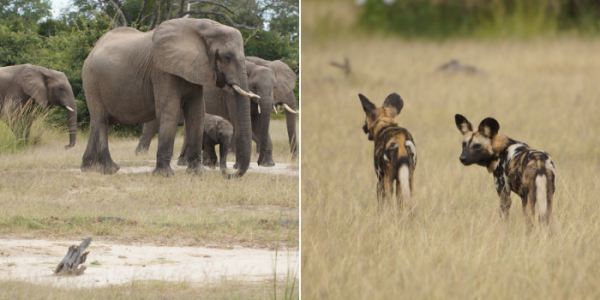 For this week though, I am going to bid you a very fond farewell and cannot wait to fill you in on all the happenings next week. Between now and then have a fab week with plenty of smiles and laughter and don’t forget to look after one another.