Its Monday and its raining leaves and great sightings

Well hello there! I hope that you had a smashing weekend and are getting ready for the week ahead, whatever it is that that will bring. Here in South Luangwa the water levels in the Luangwa continue to drop, the heat continues to rise, and the leaves are literally falling off the trees like raindrops….

Well hello there! I hope that you had a smashing weekend and are getting ready for the week ahead, whatever it is that that will bring. Here in South Luangwa the water levels in the Luangwa continue to drop, the heat continues to rise, and the leaves are literally falling off the trees like raindrops. The groundmen battle to keep up with the sweeping as the quantity is just incredible. It’s as if from nowhere some of the trees sprout incredible vibrant green leaves – the energy for which exhausts me just thinking about. 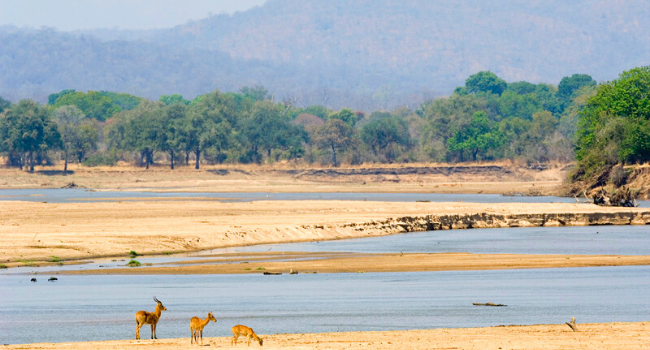 The animals in the meantime continue to wow us with their prevalence, and all the guests have been thoroughly treated to great sightings. Kiki was guiding at Nkwali last week and as the guests arrived off the late flight, they immediately started their game drive. Once they got off the tarmac road, the bet was on as to which would be the first animal they would see. The money was on a civet or elephants. But everyone lost, instead there were several hippos all out and about grazing and filling up while the sun was going down, and the temperatures slightly cooler. The familiar sounds of barking baboons sadly yielded no sighting, they headed to camp for dinner and a well-earned snooze. However, it was not to be all that restful as during the night the lions were calling all night. Arriving at the bar for breakfast, ready for the day with a cup of tea in his hand, Kiki had a good look, and it was not long before he spotted movement opposite camp. There was a lovely big male lion walking on the riverbank and another male and one lone female. He set up the telescope so that everyone had a lovely sighting and once everyone had finished their breakfast, off they went to find them. 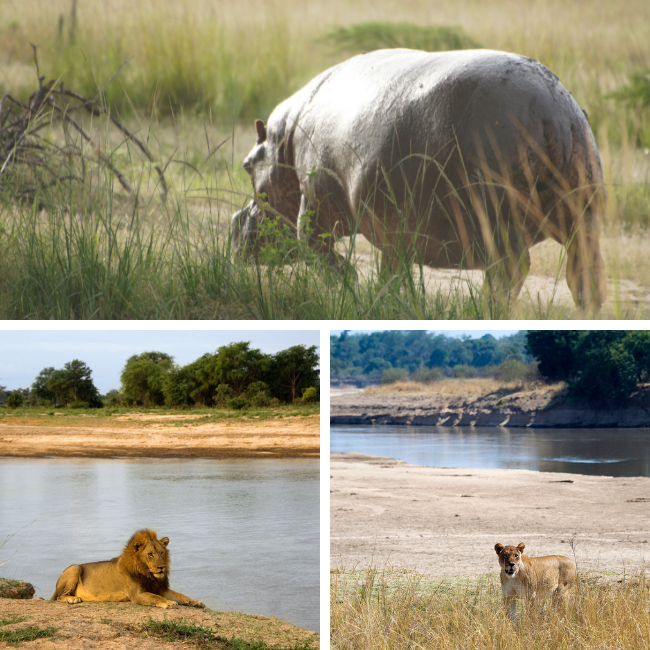 There were sightings aplenty of all our usual suspects – warthogs, impala, zebra, giraffes, and elephants… These are always a complete treat no matter what, but we do always seem to gravitate towards the “eat you” and “bite you” kind. 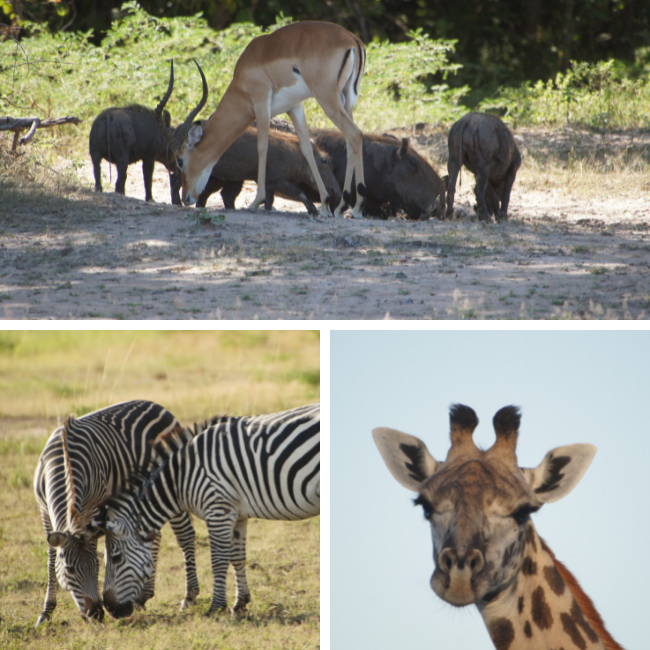 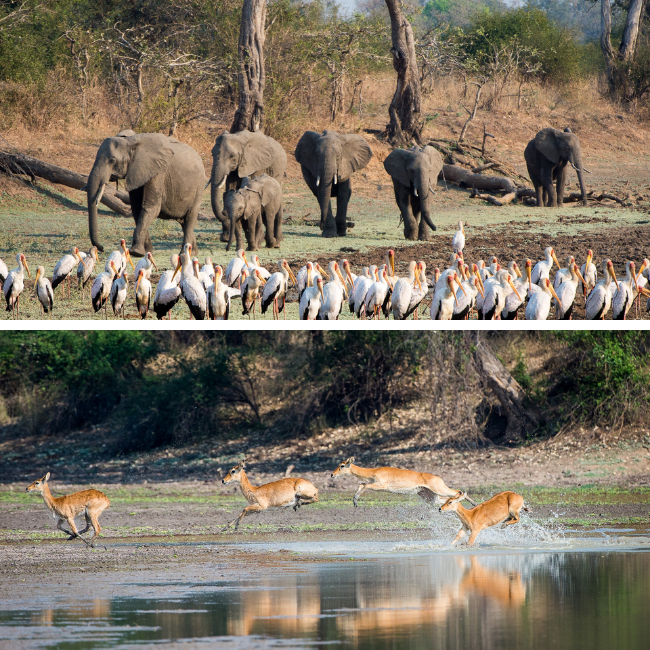 Speaking of which, after a whisper in his ear from Yona who was busy with guests at Luangwa Safari House, Kiki set off on one of his morning drives in a specific direction. He found wild dogs just having taken down an impala which was literally hoovered up by the pack. No one could guess the size of the fallen impala as they were just constantly jumping and moving around, either way it was a wonderful sighting. 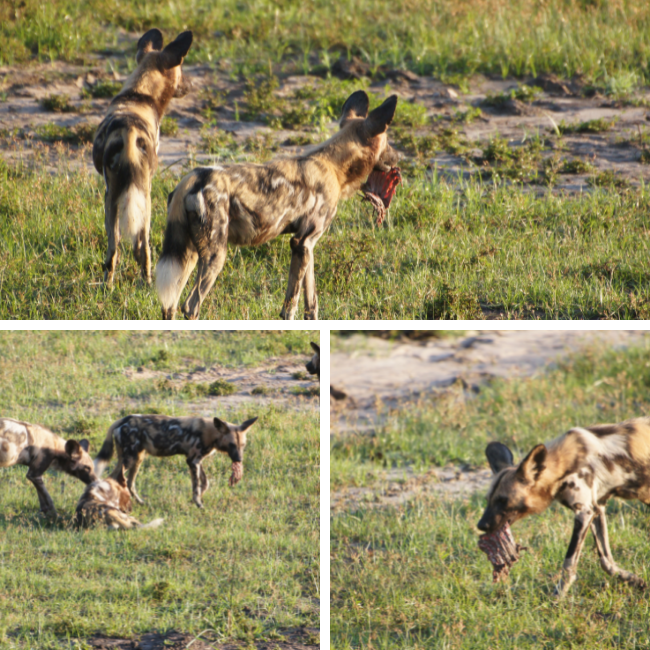 Leaving the dogs to their fight over an impala leg, everyone headed off for a cup of tea and slice of cake and continued with their game drive which included some lovely sightings of kudu and zebras. 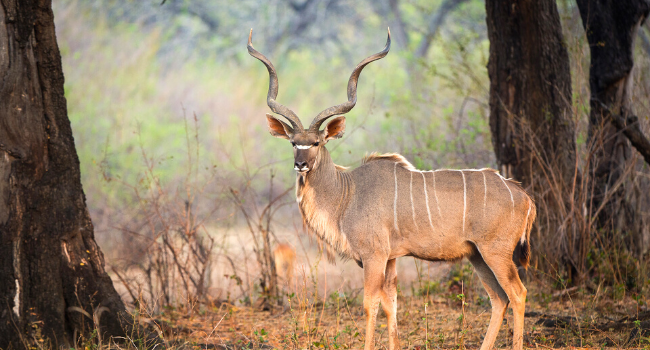 For afternoon game drive they decided to head back to the lions. Whilst they were watching the one male that they found, he just suddenly stood up and ran off to find some nice shade and flopped back down – literally the other side of the car. Confused by what had happened and by this time having had their fill of a sleeping lion, they left him there and headed off for sundowners. After just packing away the drinks and getting into the car, a lovely female leopard came straight down in front of them and headed to the river for a drink. They followed her along the road for a little while before they sadly lost her in some thick bushes and decided at that point to head back to camp for the evening. 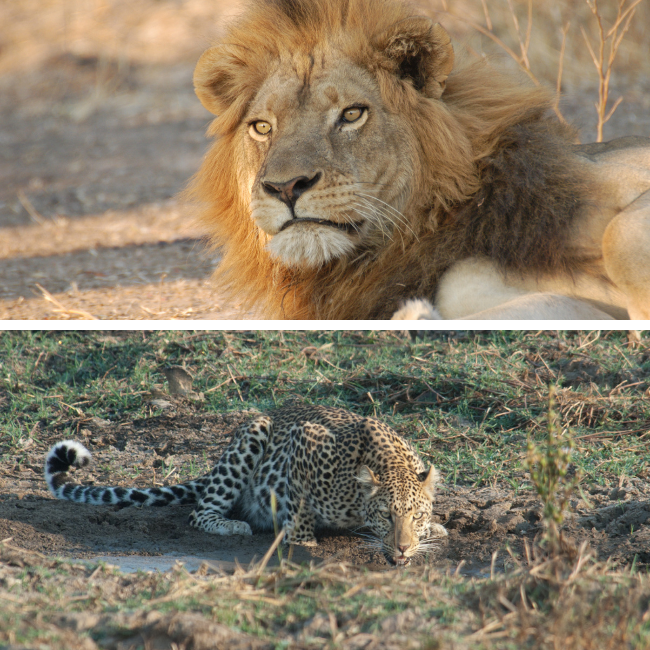 In addition to all of this, the buffalo herds are starting to increase in numbers and come in their droves down to the water’s edge to quench their thirst. And the giraffes have been treating us to excellent sightings consistently. There were 19 of them down at the Tena Tena river crossing a few days ago, all slowly heading down to drink. 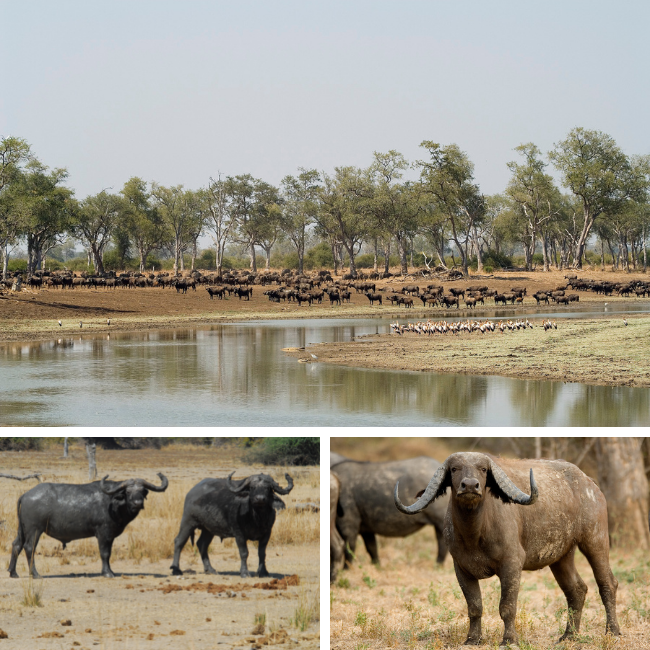 So, as you can see there is no stopping us, and we wander what other marvels await us around the next turn of the game drive as we gallop towards October. But don’t worry, we shall keep you posted of what is going on. Between now and then though, keep well and safe, have a wonderful week ahead with plenty of smiles and laughter and don’t forget to look after one another.