Its Monday and news from Mana Pools

I do hope you have had a fabulous weekend and are ready for the week ahead! Today we have some news from Sarah & Milo down at John’s Camp who have been pretty quiet this year so it is quite a treat to hear from them! Over to you both “It’s been a while since…

I do hope you have had a fabulous weekend and are ready for the week ahead! Today we have some news from Sarah & Milo down at John’s Camp who have been pretty quiet this year so it is quite a treat to hear from them! Over to you both

“It’s been a while since you have heard from us, essentially because John’s Camp has not operated for two years due to the craziness of the COVID19 pandemic. The beautiful Mana Pools National Park however thrives in every way and after two good rainy seasons (and we hope another is on its way soon) the bush is healthy and the wildlife has been in abundance. 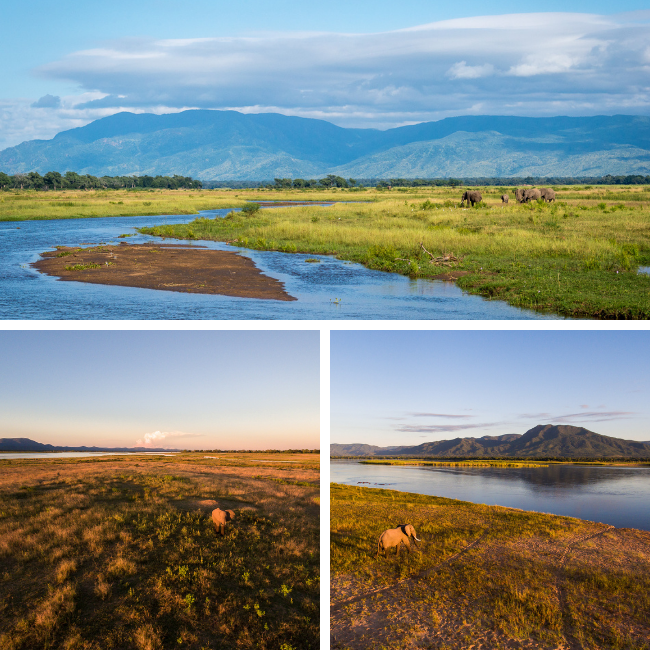 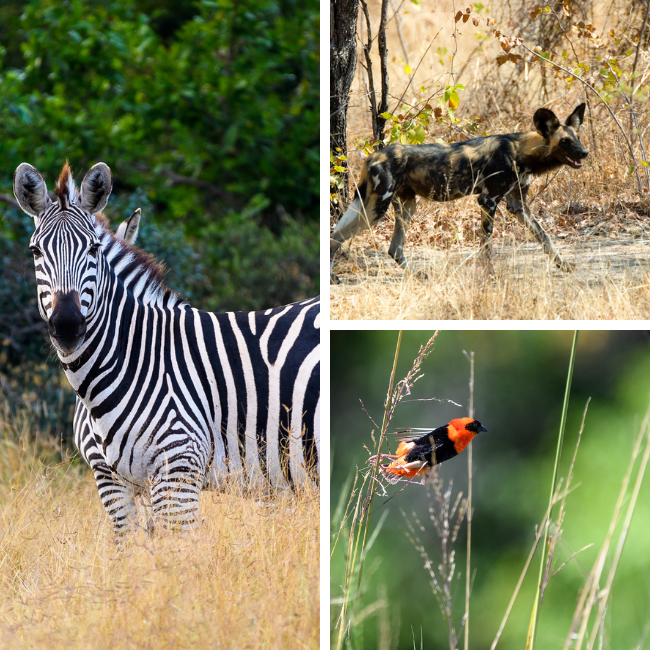 We have been lucky to have this magical park pretty much all to ourselves on a couple of occasions over the last 18 months. With our children being predominantly home schooled over the last two years, we decided to move our classroom to the star deck at John’s Camp which is the only thing which remains even after the camp is taken away at the end of the safari season. 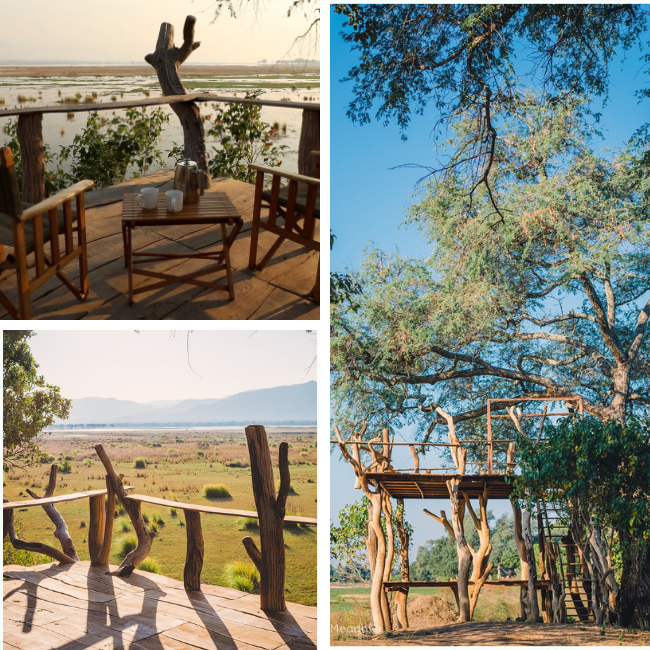 We set up our classroom on the top deck which has a phenomenal view over the flood plain towards the Zambezi River. Lucky children and lucky teacher with the main problem being staying focused as animals wandered nearby below us and the birdlife feeding in the little channels between the main river meant the deck was a continual source of entertainment. Even luckier was that we had my father, John Stevens, with us as our personal nature teacher. 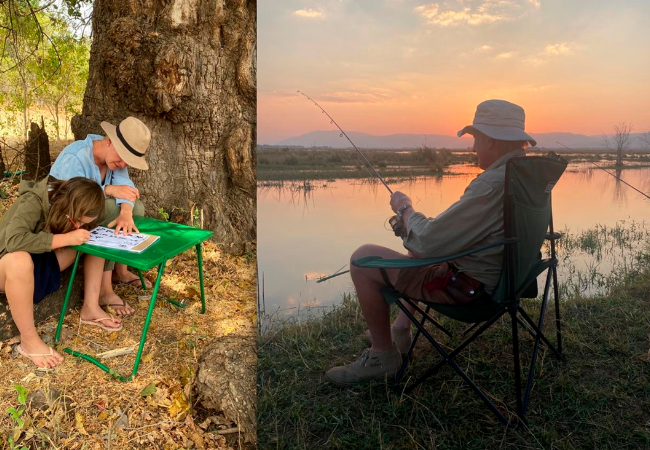 Days were spent learning about tracks, going on short bush walks, fishing, digging hide outs in the sand and building fairy houses in the riverbed – all of course while trying to keep up with the school workload. 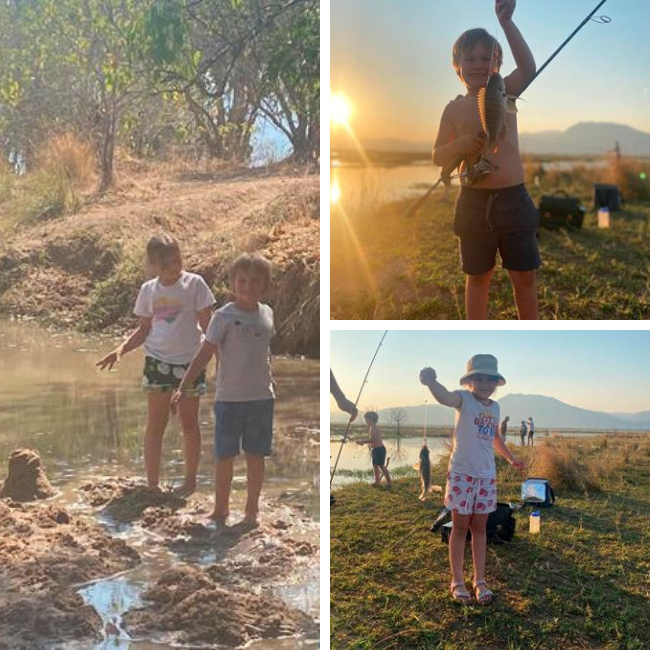 Some of the highlights while in Mana included:
• A herd on about 60 buffalo slept out in front of camp on the flood plain below.
• A beautiful bull elephant joined us for breakfast one morning (we were safely on the bottom deck mere feet from him!)
• A hyena chased an impala into the water just near the star deck, before (sadly) managing to kill it.
• A nightly visit by the resident hyena who had a good attempt at stealing our shower box full of shampoos, soap etc.
• A snake in the shower – which turned out to be a harmless bush snake
• A pride of 12 lion wandering through the camp just on dusk
• An afternoon of fishing which brought in over 40 fish – of course all released apart from a few which we had for a delicious fresh fish supper..

All of this and we hadn’t even moved out of the camp …. 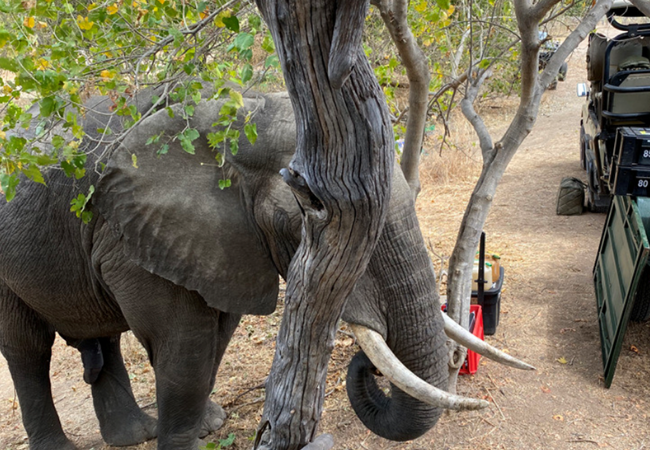 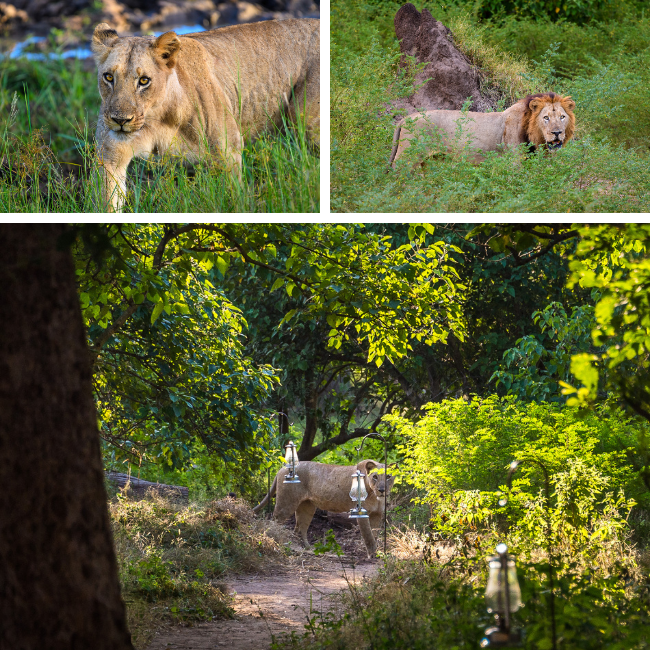 Recently Milo has been back in Mana emptying and tidying the container we leave down there with some of the camp equipment such as the bed frames and showers, all in preparation for opening in May 2022!! We really can’t wait to open again and look forward to welcoming you to and sharing this very special, very magical corner of Africa. 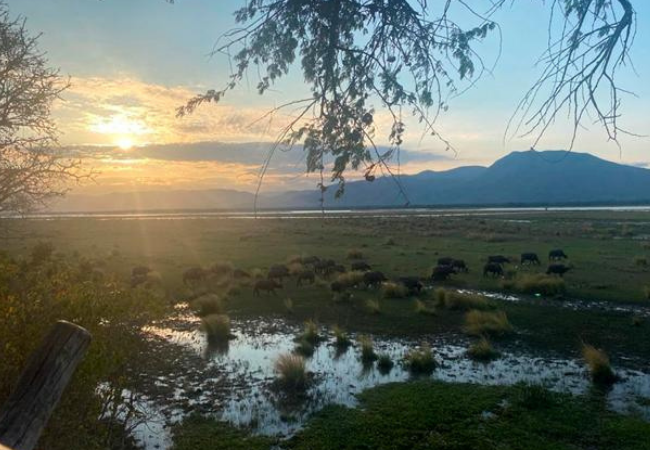 How lovely to hear from you again Sarah and Milo and we look forward to many more updates once John’s Camp is finally open again!

Well that’s all for this week folks! Take care, keep smiling and don’t forget to look after each other!