Its Monday and the long awaited Shoebill Safari

Well, hello there. I do hope that you are fabulously well and sitting ready for a specialist safari update this week, as we hear from Carol and Peter Archdale. They have recently returned from a trip with us to the Luangwa and also a little further afield. Carol and Peter over to you: “It was so exciting…

Well, hello there. I do hope that you are fabulously well and sitting ready for a specialist safari update this week, as we hear from Carol and Peter Archdale. They have recently returned from a trip with us to the Luangwa and also a little further afield. Carol and Peter over to you:

“It was so exciting when we finally landed in Mfuwe after waiting 2 years for our Shoebill Safari. But before heading north we got to spend some time at Luangwa River Camp for the start of the safari. We crossed the river by boat to get to Luangwa River Camp as the river was still quite high and were met by Daudi who is the camp manager as well as Kim, the hostess and the rest of the team. Luangwa River Camp had had a bit of an overhaul since being flooded earlier in the year and I must say we were very impressed. Our room was a great size and very comfortable. Kim, the camp’s hostess could not have been more helpful. We had a great couple of days being taken by boat across the river for game drives in our vehicle. We had lots of wonderful sightings including watching some elephants crossing over the river and their return journey the following morning as well as lots of other wildlife and wonderful sunsets. 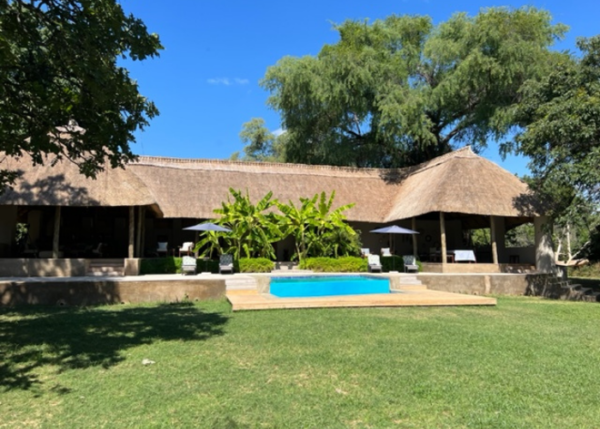 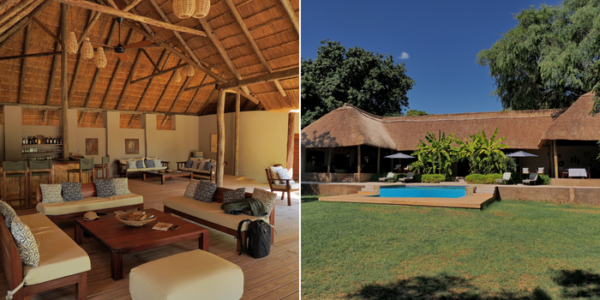 After our farewell to the River Camp, we were taken across the river to meet our guide, Kiki, who was to take us for the next 4 nights of our Shoebill trip. It was lovely meeting Kiki again, having met him 3 years previously when we were staying at Nkwali Camp. We headed off to Mfuwe airport where we were greeted by our pilot, Paul, who was to fly us to Wasa Camp in Kasanka. Once landed, we all headed to the Camp. That afternoon we headed off in search of the blue monkeys and the wonderful bird life in the area. We left the vehicle and walked into the forest but sadly no sightings of the blue monkeys, however, we did see a variety of bird life, including the Schalow’s Turaco. 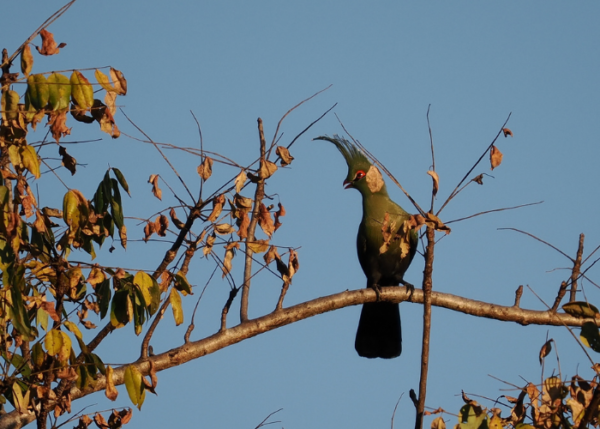 The next morning, we went in search of the sitatunga. Having climbed the viewing post, we were greeted with several of them in the clearing. Lots of photographs later, we continued with the hunt for the blue monkeys. We could hear them but not see them. After lunch and a quick siesta, we finally found the blue monkeys and I was very surprised to get a photo of one of them as they were so incredibly quick and very shy. The bird life in the area is wonderful and we had some great sightings during our stay. This included the Narina Trogan, Schalow’s and Ross’s Turacos, Wattled White Eye, Bohm’s Bee-Eater and the Black Backed Barbet. 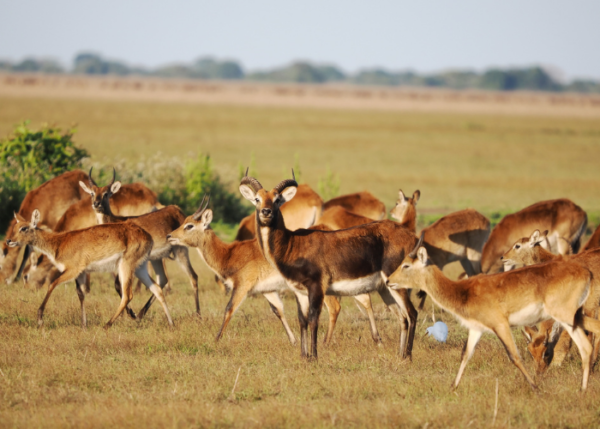 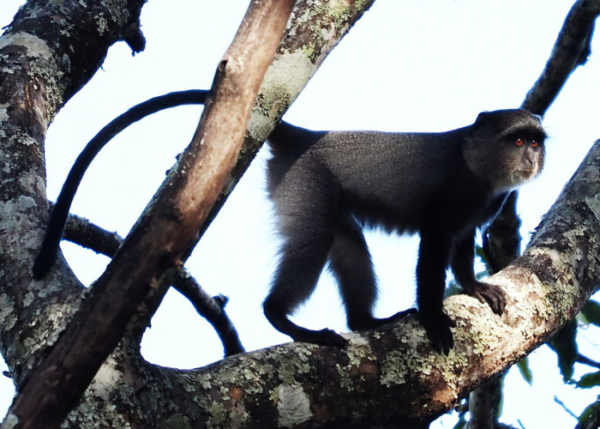 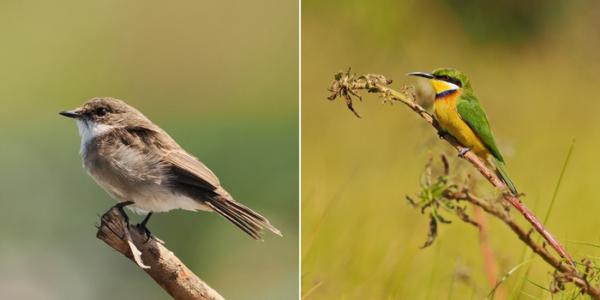 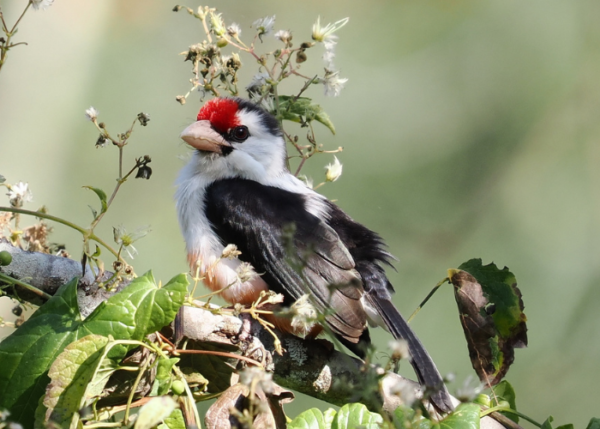 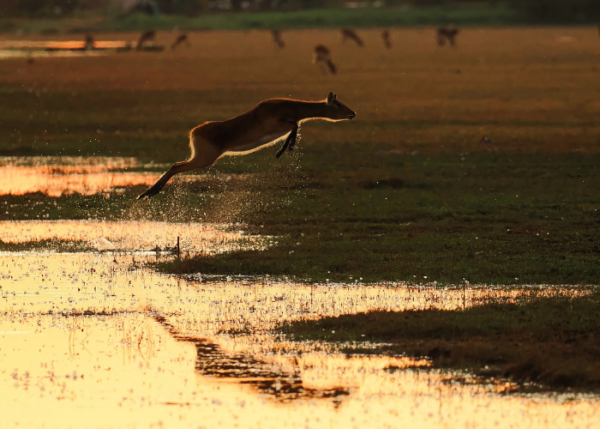 After our outing the following morning, it was back to the airstrip for our short flight to Bangweulu for the Shoebills! We were to travel by canoe which was being poled to the camp about 45 minutes away. The polers are incredibly fit! About 10 minutes after we set off, we saw our first shoebill – a young one that had been looked after and fed by the villagers until it was able to go on its way. Our journey took us through narrow waterways and then into the more open areas that were full of waterlilies which was lovely. 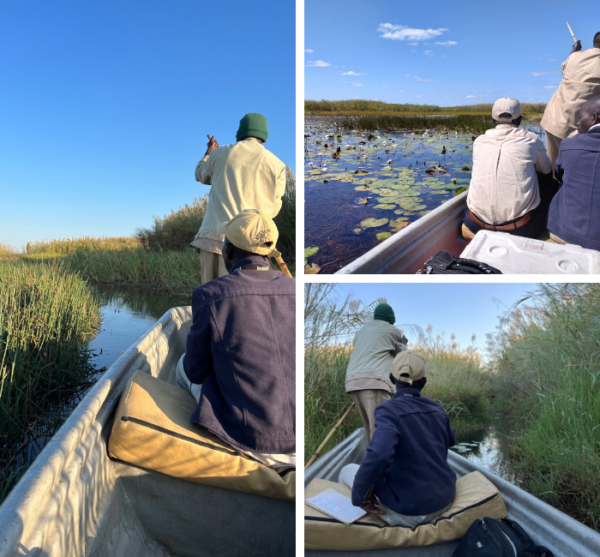 On our arrival at the Lodge, we were given a wonderful lunch before we headed off in our canoe for the afternoon trip. We saw lots of wonderful bird life but no shoebills. The next morning we set off for the serious hunt for the shoebills. After a canoe trip through the waterways, reeds etc we came across a few young children who were pointing to where there was a shoebill. After manoeuvring our boat through the narrow channels, we finally found our elusive shoebill! It was so comical. It watched us for some time before we decided to move forward to see if we could get a clearer view of it. When we got to a clearing the shoebill was thinking about fishing and stood watching the channel for some time. Having decided to leave it the next minute it had caught a large catfish. It was trying to swallow it quickly as an African Fish Eagle was overhead. Once that had gone, the catfish reappeared in the shoebills mouth. After finally swallowing the catfish once more it then came over to the edge and had a few drinks before then flying off. What a sighting – we must have spent at least an hour watching it. 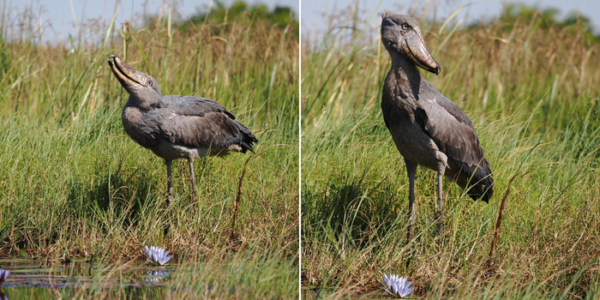 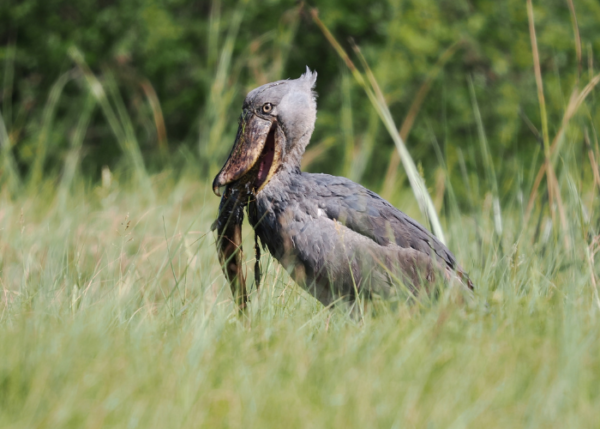 Back at the Lodge and after lunch we went back to go and see the Black Lechwe. For the last part we were on a vehicle – there were hundreds/thousands of them. Sadly, we didn’t have too long with them before we had to head back which was another 45-minute canoe trip. The following morning, I stayed back at the Lodge, but the others found another shoebill which they enjoyed watching. Just some of the other wonderful birds we saw while in Bangweulu – Lesser Jacana, African Jacana, Marsh Widowbird, Blue-Breasted Bee-Eater, Whiskered Turn and the Swamp Flycatcher.

Sadly, it was then time to pack up, have breakfast and head back to the airstrip for our flight back to Lusaka. It was a wonderful trip and well worth the two year wait.” 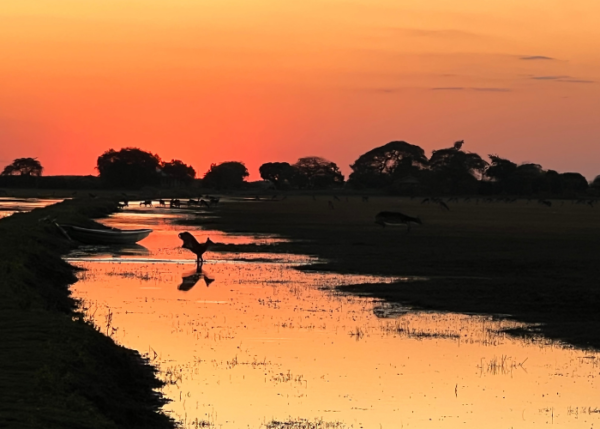 Wow, amazing! Thanks so much Carol and Peter. What a wonderful experience, thank you so very much for sharing with us. There is very little else that can beat such a trip, so I shall gracefully bid you a very fond farewell. Have a wonderful week ahead with plenty of smiles and laughter and don’t forget to look after one another.