Its Monday and the power of lucky beans

Well, hello there! I hope that you are fabulously well and have had a wonderful weekend. Here in the Luangwa the animals continue to entertain us with their appearances, but this week I am going to venture into a little personal account for once. It is not often that we as a family get out…

Well, hello there! I hope that you are fabulously well and have had a wonderful weekend. Here in the Luangwa the animals continue to entertain us with their appearances, but this week I am going to venture into a little personal account for once. It is not often that we as a family get out into the Park, but Jack having hit the grand old age of 4, is now able to sit in a game-viewer for 3 hours and either enjoy the sights or just sing along and amuse himself. With this discovery we decided to take the leap and go on an adventure.

Taking a visit up to the Nsefu Sector is usually a 6 hour round trip zooming up the road, visiting Tena Tena to make sure everything is ok and then on to Nsefu to do the same. But this time we decided to make a little outing of it. Nkwali Camp was empty for a couple of days so we packed our bags and headed off after lunch arriving at Nsefu with time to unpack before heading out on our afternoon game drive. As most here know, I am always slightly “unlucky” with my conventional sightings; but that doesn’t stop the enjoyment and this time we were on a mission to get to the stork colony. It’s a little late in the year and all the mums and dads have left but we decided to go sneak a peek all the same. After a rather steep descent into croc river, we emerged on the other side onto Luangwa Wafwa for the first time this year and bumbled across onto the island. 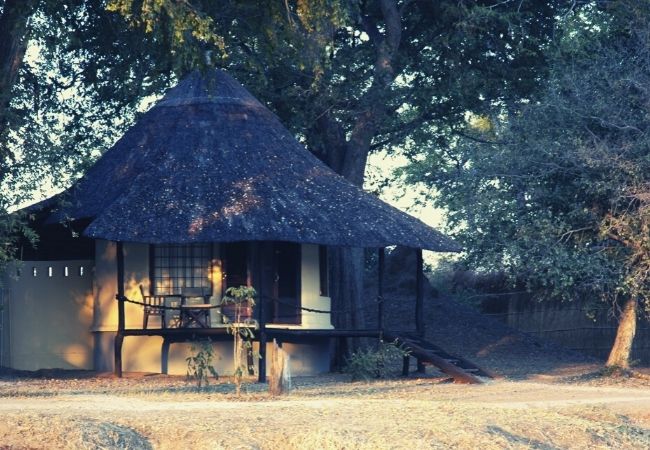 As we got onto the island, Rob was instructed to stop the car for there was the unmistakable colours of a lucky bean creeper. Picking one off the vine to show Jack he took off some of the seeds and gave us each a couple, and no sooner had we started the car again did we find 2 lion cubs! A little voice piped up “wow mama, those beans really were lucky”. The cubs were about 8 months old but were on their own so slightly skittish, so we left them alone quickly so as not to scare them into open territory and carried on to the stork colony. 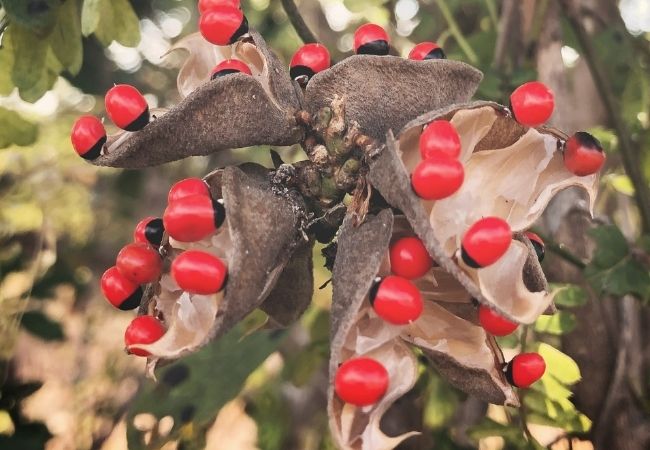 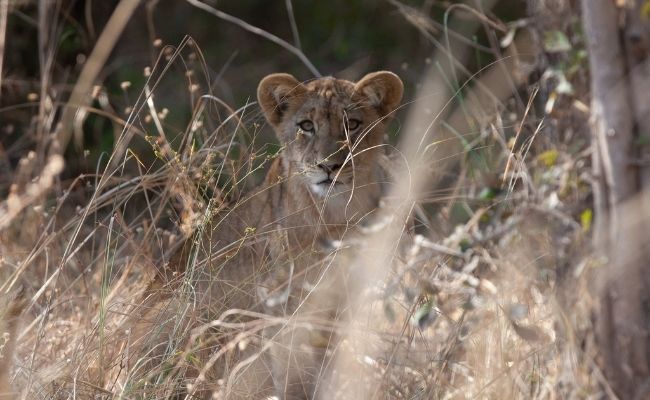 Arriving at the colony after the storks have nested is always quite an incredible sight as the trees rise out of the plain covered in poo looking like enormous ghosts. The storks were still scattered around and there were still a few youngsters hanging out in their nests reluctant to leave and start fending for themselves and plenty of youngsters hanging out on the ground catching some poor trapped fish in a small remaining patch of water. Despite the dwindling numbers the site remains an impressive one and we were so excited to have made it there this year. 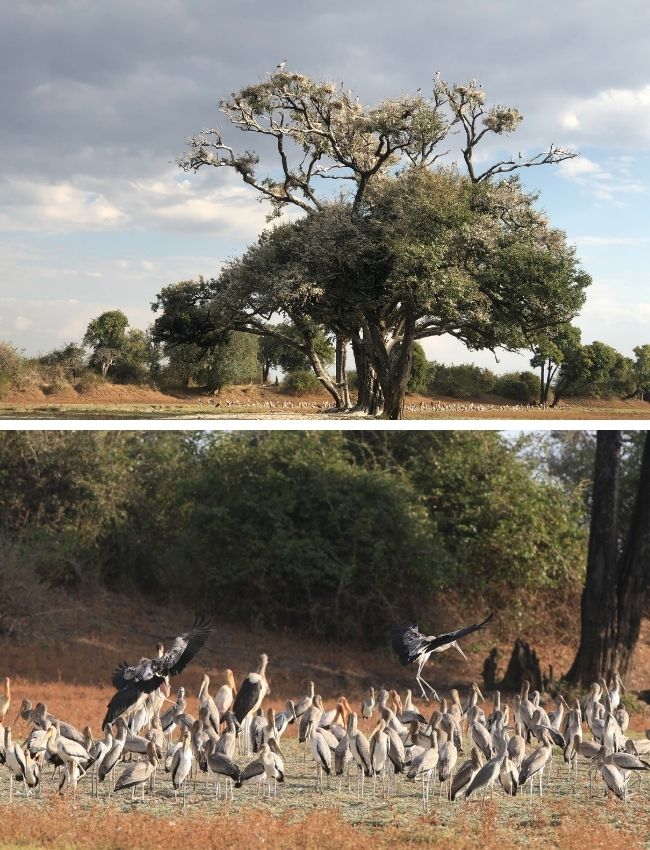 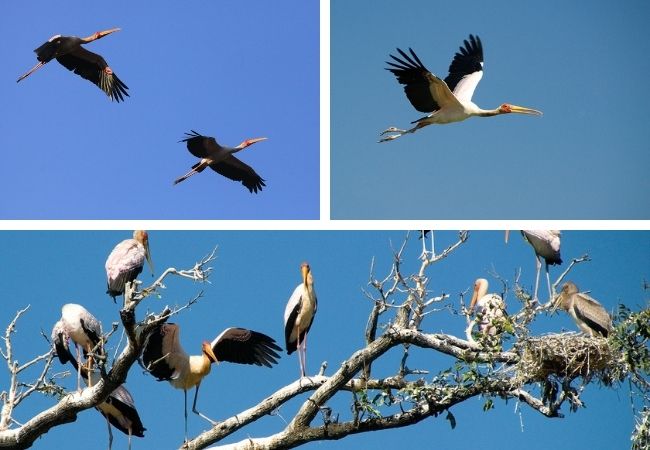 By now we had been out for two and a half hours so enthusiasm from a certain small person was starting to dwindle so we headed back to ‘Warthog Park’ where we parked the car and enjoyed some glorious sundowners before heading back to camp. After what seemed like a rather long night (all 3 of us in the same bed with a myriad of cuddly toys) the gentle sounds of the morning started and so at 5am we got up and got ourselves packed up and ready to go. The early morning departure certainly paid off as no sooner had we hit the riverside road did we see lion tracks, so following these all the way up to second ebony and over the hard ground just as the road forked it was decision time. Fortunately, a large cloud of dust on the beach was a giveaway and we found 4 female lions playing in the sand chasing each other and a couple of unsuspecting hippos and having a lovely bonding session in the cool of the morning. The sun wasn’t quite up so sadly for photography the light was a little flat, but it was the sighting that was the most important and after an hour of playing and gentle calling they disappeared into the bush. 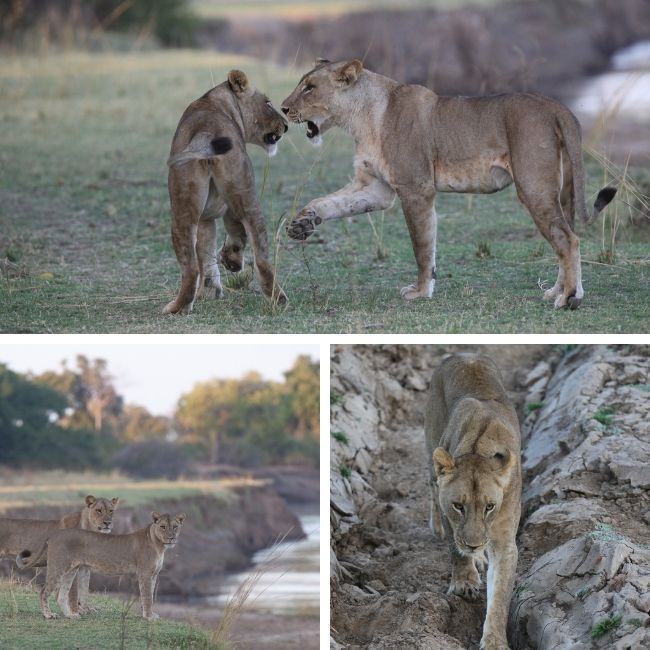 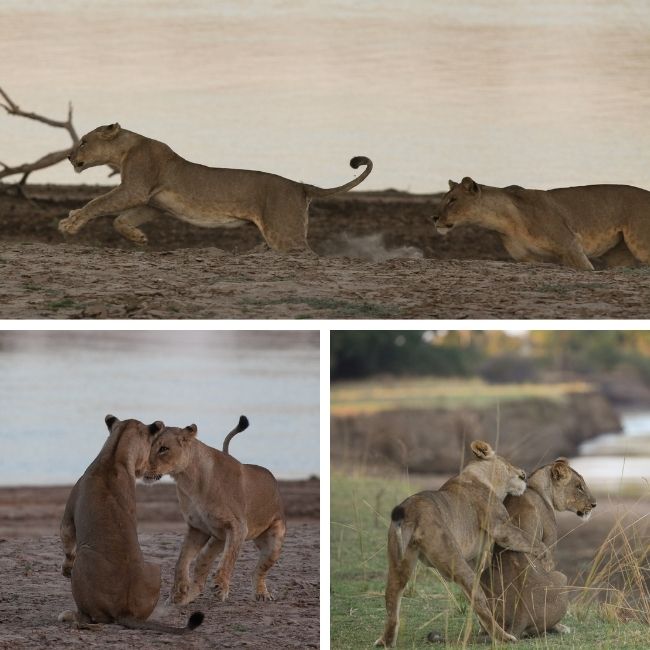 The remainder of the drive involved lots of birding, hippos, crocodiles, and the ever-present hyena as well as lots of singing from Jack. Stopping for breakfast in the park around 9 then a quick check on Tena Tena we headed home tired but happy after having spent the most wonderful time up in the Nsefu Sector. Willie and his team have been busy with guests as has Kanga as we have a few intrepid explorers with us, so we look forward to hearing all of their tales soon. 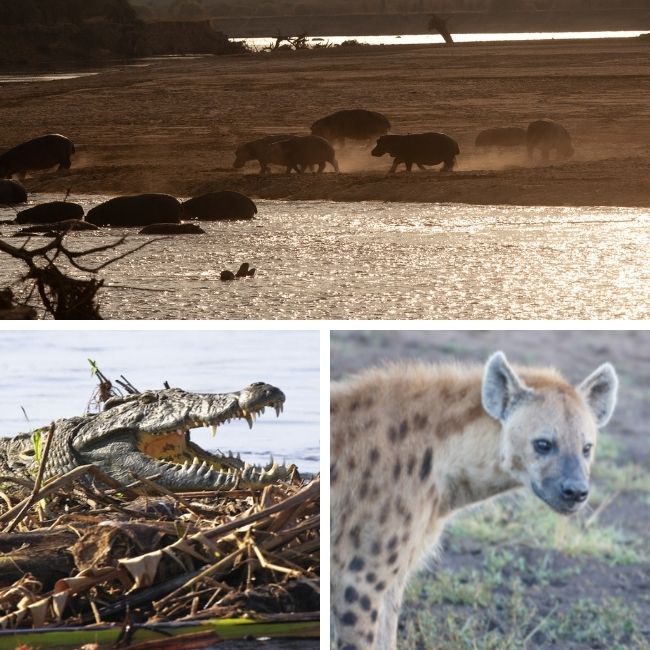 Between now and then have the most wonderful week with plenty of smiles and laughter and don’t forget to look after one another.