Its Monday and wild dogs galore

Hello there! I hope that you have had a lovely weekend and are sitting ready and raring for the week ahead. Here in the Luangwa, we are waving a slightly gloomy goodbye to winter as the days heat up and we prepare ourselves for the intense heat that October brings, but with it the promise…

Hello there! I hope that you have had a lovely weekend and are sitting ready and raring for the week ahead. Here in the Luangwa, we are waving a slightly gloomy goodbye to winter as the days heat up and we prepare ourselves for the intense heat that October brings, but with it the promise of rain. Just to make you jealous as I sit here and write this week’s newsletter to you, all wild dogs have literally just run through my garden. Rather appropriate given the sightings that Kiki has shared with me for this week’s update. 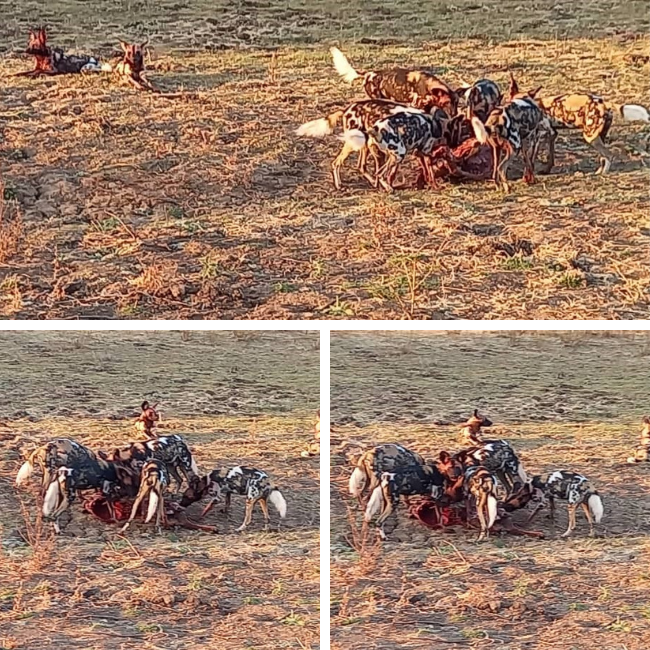 For the whole week we were bombarded with incredible sightings of everything from a male giraffe in Wamilombe in the morning, and in the afternoon just past twin baobab (he was on a mission!) and heading towards Chichele Hill. Everyone was amazed at the distance he had covered during the day. The drying up lagoon at Robin’s Bridge has been host to our regular hippo who now when he gets up, creates an incredible sucking squelching noise as he is partially submerged in thick gloopy water or watery gloopy mud! When he moves out, the warthogs move in and take their turn to cool down in the mud. The elephants are everywhere around Nkwali now as the ebony trees are fruiting, and the elephants are feasting. Whilst wonderful to see, it does make for an interesting walking through camp. Poor Leonard and Daniel were a little late taking lunch to their Robin’s House guests after having to make quite the detour yesterday. 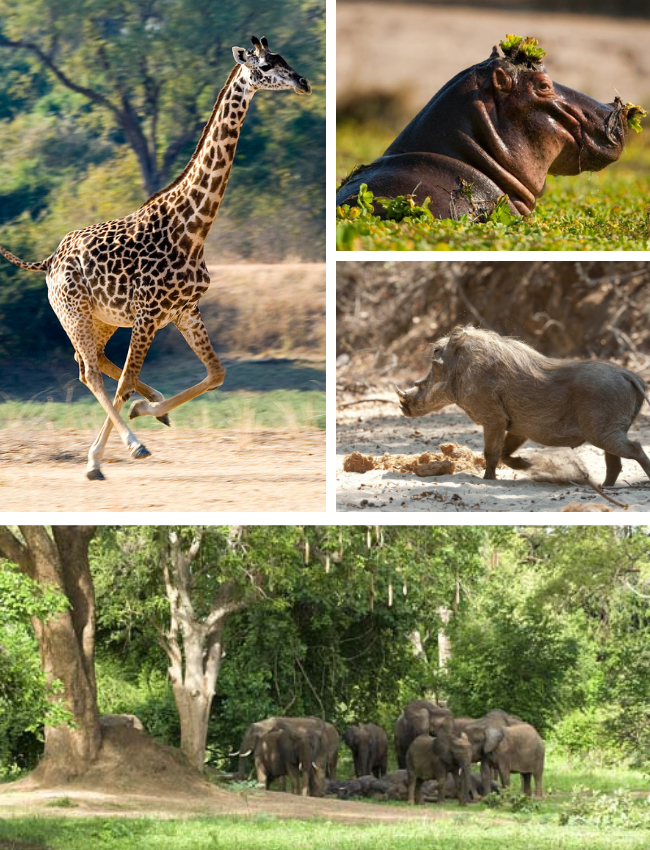 Opposite Nkwali the lions have been roaming up and down the bank and we have been lucky enough to even see them from the bar on more than one occasion. The two males have teamed up with a couple of females and the girls spied a zebra drinking at a lagoon so crouching down they began creeping up on it, but the zebra managed to get away. 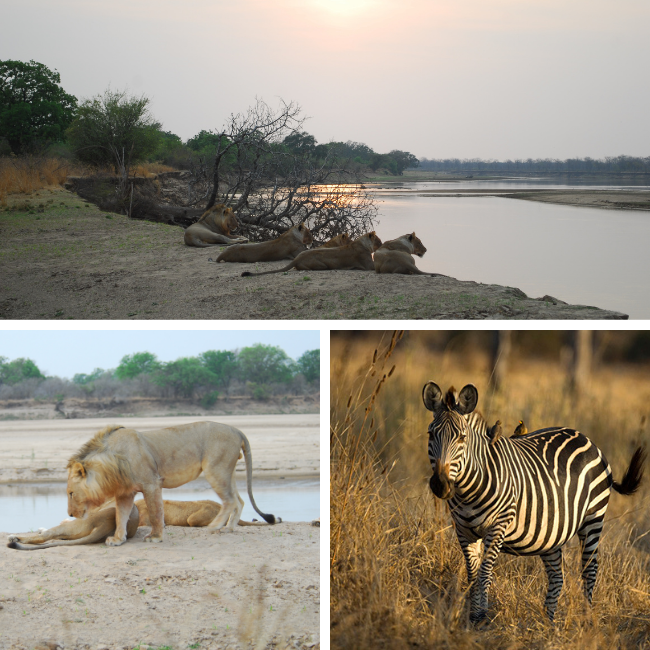 The wild dogs however have been the star of the show with heaps and heaps of sightings both in the park and our side of the park. The bigger pack in the park were found by Kiki just after they had hunted and killed a young female kudu. The interaction and excitement of the dogs was quite a spectacle, but more drama was to come as the hyenas came in and did their very best to steal the feast. The dogs really gave them a run for their money and the hyenas got quite a beating but, in the end, they managed to steal some bones, so it wasn’t all for nothing. 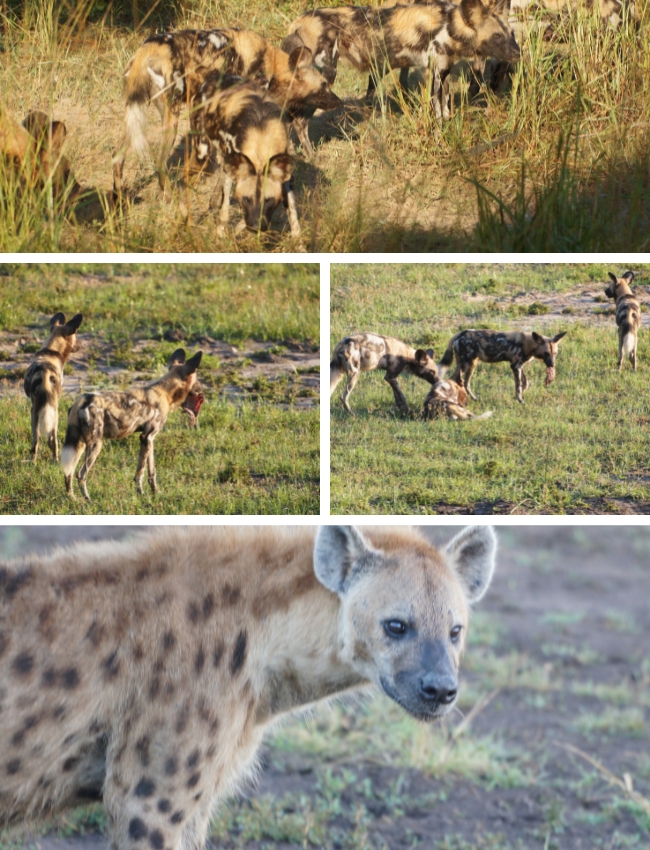 Lastly let’s not forget about the leopard sightings of which there have been a few but the most surprising one being of a female feeding on an impala. Not that surprising just yet but wait…. Suddenly in everyone’s peripheral vision there was a slight rustle and shake of the leaves and there was a little cub hiding in a bush still very shy and probably about 3 months old. Sitting still and quiet the youngster grew a little in confidence until finally the guests watched as the mum took her youngster for a drink at a lagoon and then came scurrying back to the kill. 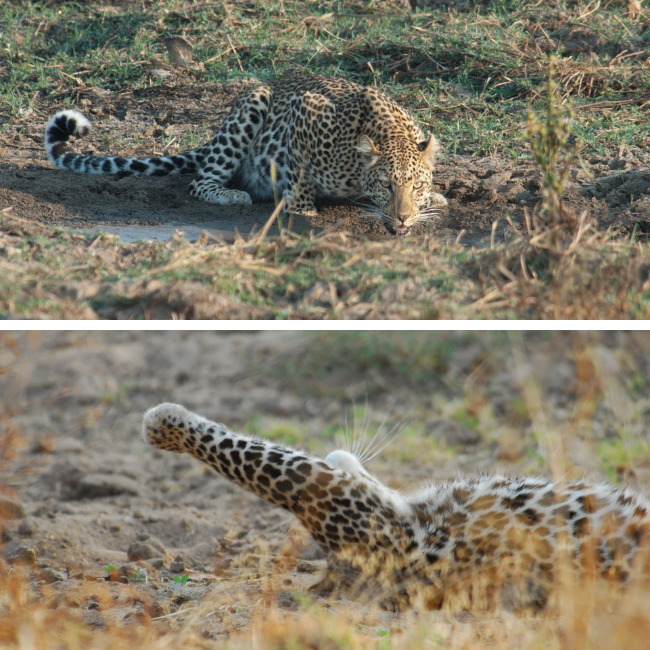 After such a busy few drives the guests decided that it was time to take in the views and the smaller details that the Luangwa has to offer. What a treat to have got to that point and just enjoy sitting sipping on a gin and tonic on the banks of the river absorbing the magnificent views.

So, there you have it for this week, we have been incredibly lucky with sightings and are certainly spoiling our guests and we hope to be able to share this with more and more guests. Between now and then though I shall bid you a very fond farewell for this week with plenty of smiles and laughter and don’t forget to look after one another.